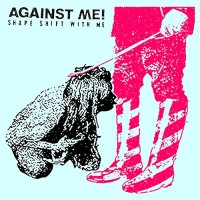 Transgender Dysphoria Blues was a groundbreaking masterpiece. Not only was it Laura Jane Graceâ€™s first album after coming out as a trans woman; not only was it Against Me!â€™s first concept album; not only was it the bandâ€™s first album dealing with trans issues and topics; but it was one of the first albums ever by anyone to deal with these issues. So with such an amazing album under her belt, the question on everyoneâ€™s mind was: how would Graceâ€™s unofficial solo project, Against Me!, follow Transgender Dysphoria Blues? Would she continue to write epic concept albums and to address trans issues? Would she revert to the style of previous albums like White Crosses and New Wave with their one-off songs and big pop hooks? Shape Shift With Me definitively answers both questions with a resounding â€œyes.â€

I call Against Me! an unofficial solo project because it started out as Graceâ€™s solo project before any other band members joined, and has had a rotating line-up ever since Still, to be fair, guitarist James Bowman has been a consistent member since the band started recording full-length albums. The rest of the current lineup is rounded out with members of such great punk bands as Rocket from the Crypt and the vastly underrated Sweedish communist mod-punk band, The (International) Noise Conspiracy. The new lineup makes for one of the most robust sounds that the band has ever put together, and is a far cry from the tinny, narrow sound of the projectâ€™s debut album, Reinventing Axl Rose. Shape Shift With Me shows the talent for pop hooks that was shown on White Crosses. â€œCrash,â€ in particular, is possibly the most perfect pop song that Against Me! has ever pumped out; a song that, like most of the album, trims all the fat down to the bone leaving only what the song really needs. Still, amidst the hooks are some of the darker, rawer punk elements seen on Transgender Dysphoria Blues. Then other tracks go in completely new musical directions for the band, like â€œSuicide Bomberâ€ with its Beatles-esque melody and blues-rock guitar solos.

The album gives us a very Clash-style opening with a muffled foreign language radio broadcast (I think itâ€™s Spanish, but Iâ€™m only semi-fluent and itâ€™s hard to hear, so it could be Portuguese) that leads into the rip-roaring power chords of â€œProVision L-3,â€ which is probably the closest that Against Me! will ever come to recording a traditional hardcore punk song. The title of the song is the name of one of those body imaging scanners that airport security uses. The songâ€™s lyrics speak of a â€œculture of suspicionâ€ and the creation of an illusion of security. However, after a few more songs go by on the album, â€œProVision L-3â€ seems a tad out of place as itâ€™s the only purely political song on the album. After about two or three more songs, a common theme starts to emerge, and something becomes abundantly clear: this is a breakup album.

Okay, so maybe you figured that out already from the three singles released before the album came out, â€œ333,â€ â€œCrash,â€ and â€œHaunting, Haunted, Haunts,â€ all of which are obvious breakup songs. Itâ€™s hardly surprising that Grace has breakups on her mind, as she divorced from her second wife and mother of her daughter, merchandise designer Heather Hannoura, since the release of the last Against Me! album. Not every song seems to be directly related to her divorce, but almost every song is a tale of heartache and love gone wrong. At least a few seem to be about different relationships than her marriage. But theyâ€™re almost all heartbreak tunes, and a good number of them, particularly â€œBoyfriendâ€ and â€œNorse Truth,â€ seem to center around the difficulties of finding love as a trans woman. There are other themes that weave through the album. The concept of â€œhauntingâ€ comes up a few times, and not just in â€œHaunting, Haunted, Haunts.â€ The first verse of â€œDelicate, Petite & Other Things Iâ€™ll Never Beâ€ is altered only slightly to be reused as the chorus of â€œNorse Truth.â€ It may not be a strict concept album the way Transgender Dysphoria Blues was, but it certainly seems to be a loose concept album in that itâ€™s organized around consistent themes and topics.

Lyrically, itâ€™s the most poignant and cutting of Against Me!â€™s albums. â€œDead Ratsâ€ gives us the dark imagery of its chorus with â€œShallow graves for all dead rats/I like the dark clouds the best.â€ The Cody Votalato co-written track â€œNorse Truthâ€ is probably the albumâ€™s high point, and refuses to pull any punches in its visceral and biting imagery doled out in lyrics that are more spoken word than singing. The intro to the song sounds surprisingly menacing with the graphic lyrics of â€œTits out for the boys/Hard cocks, hard cunts/Line â€˜em up!â€ "Rebecca" is a high-speed pop-punk song that largely works based on the fact that "Rebecca" is a surprisingly fun name to shout out in a punk song. Â â€œ333,â€ the first single off of the album, is one of Graceâ€™s greatest anthems, and even in its self-hating moments, it delivers an odd note of hope.

Does Shape Shift With Me match the brilliance of Transgender Dysphoria Blues? Maybe not, but it comes damn close. Laura Jane Grace demonstrates her ability to cultivate an ever growing, ever changing sound that still sounds consistent amongst all of her other albums. While Shape Shift With Me is a distinctly different album than the bandâ€™s debut, Reinventing Axl Rose, you can still listen to the two records back to back and clearly tell theyâ€™re from the same artist. Shape Shift With Me is a worthy follow up to all of its predecessors, and it makes it hard to imagine that Laura Jane Grace is even capable of putting out an album that isn't a masterpiece.

Turnstile: Move Thru Me [7-inch]