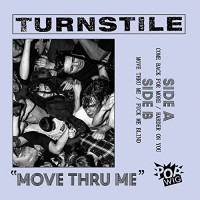 For starting life as a Trapped Under Ice side-project, Baltimore's Turnstile has certainly managed to carve out their own unique niche in the greater realm of hardcore. Falling somewhere between Desperate Measures-era Leeway and a more aggressive Red Hot Chili Peppers fronted by a large bird (but in a good way), Turnstile is nothing if not their own band. And after a slew of downright solid releases, the band is back with a new EP called Move Thru Me that is appropriately Turnstylish.

Clocking in at four songs in just under eight minutes, the band's new 7" still manages to backhand the listener with their trademark riff-heavy hardcore in short order. "Riff-heavy" is really the operative phrase here: guitarist Brady Ebert seems psychically connected to the fret wizardry of Dr. Know and A.J. Novello cranking out chunky bangers that would have sounded perfect on Quickness and any post-Born To Expire Leeway. Drummer Daniel Fang and bassist Freaky Franz keep the low end bolted to the floor and Brendan Yates tops everything off with one of the most recognizably outrageous voices in hardcore.

The only bad thing to say about Move Thru Me is that the four songs are really only two and half new ones and a Give cover that is the first Turnstile track I wasn't blown away by. It's not that it's bad, I just want to hear all the new Turnstile I can. Regardless, some additional kudos need to go out to Pop Wig Records, the new indie label founded by TUI, Turnstile, and Angel Du$t members. More bands need to parlay their success into putting out their own records on their own terms.

Against Me!: Shape Shift With Me