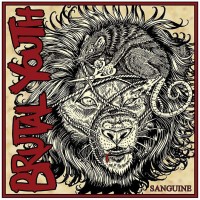 Brutal Youth has been fighting to be one of the most unique contemporary hardcore bands to come out of Canada and with the release their third full-length Sanguine they have arguably done just that. The album is not what you would call a concept album, but it is fair to say that the theme of death plays a major role. Just by taking a look at the track listing you will see that the record is split up into five â€œchapter songsâ€ all titled and ordered in the five stages of grief (â€œI. Denial,â€ â€œII. Anger,â€ â€œIII. Bargaining,â€ â€œIV. Depressionâ€ and â€œV. Acceptanceâ€). On top of that, when you look up the word sanguine in the dictionary it means â€œoptimistic or positive, especially in an apparently bad or difficult situationâ€ or â€œa blood-red colorâ€ â€“ either way it all fits together quite nicely.

When you go through the bandâ€™s discography you can see that they have been able to incorporate fantastic melodic vocals and screaming/yelling vocals together in their fast and abrasive hardcore songs. And they have definitely taken that skill to a higher level on this album. Sometimes the band just includes big, anthemic â€œwhoaâ€™sâ€ to their very heavy, more hardcore-based tunes like â€œDenial.â€ Even the inclusion of gang vocals in the song â€œThick As Thievesâ€ gives the track a ton of angry emphasis that only a band like Brutal Youth could pull off. There are other songs though where they allow melody to be much more prevalent most notably in the song â€œThe King.â€ This track is also where you hear just how creative the band has gotten when it comes to their instrumentation, too. The use of muted guitar notes that slowly build up into these piercingly loud high notes in the main guitar riff is nothing short of brilliant as are the gloomy bass fills that occur in between the showered guitar chords as they ring out. It is also worth mentioning the wailing guitar introduction to â€œSpencer St.â€ (or â€œSandpitâ€ as it is called on their Bandcamp page) is something you really donâ€™t hear in hardcore punk album. What it shows is that the members of this band are true musicians that strive to continue to master their craft and to be different and stand out from the type of hardcore that consists of basically three or four chords played quickly with some screaming that we tend to get a lot of.

For those of you that might not know, Todd Serious was the lead vocalist of the Canadian punk band The Rebel Spell (Check them out if you havenâ€™t yet. They rule!), who died in March 2015 in a climbing accident. The theme of death on this album really comes to a head when you get to the second to last track on the album titled â€œTodd Serious.â€ With lyrics such as, â€œAnd now youâ€™re gone/And now youâ€™re gone/But Iâ€™ll always carry you in my heart and in my mind,â€ suddenly the whole theme comes full circle. I don't think the fact that this song comes right before the last track â€œ V. Acceptanceâ€ was any sort of coincidence.

Brutal Youth is one of those bands where each release gets better compared to the last and Sanguine is no exception. It is clever and intricate on the instrumental and vocal sides, and yet very deep and thoughtful at the same time. Sanguine is truly a remarkable album and is one of the best to be released this year.