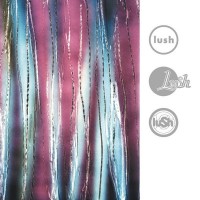 Hereâ€™s everything you need in order to get a good understanding of why this little shoegaze band from London has a devout cult following and why their reunion matters so much.

Going back some ways, itâ€™s pretty remarkable just how many bands in niche genres have reunited in recent years. For the noisy shoegaze genre, you have bands like the almighty My Bloody Valentine, The Jesus and Mary Chain, Ride, Swervedriver, Slowdive, and now Lush. No one ever thought that this could happen, but it did.

Lush were a four-piece band started in 1987. You have lead singer and guitarist Miki Berenyi, backup vocalist and guitarist Emma Anderson, Bassist Phil King (replacing original bassist Steve Rippon in 1992), and drummer Chris Acland who tragically committed suicide back in 1996.

This box set collects all three studio albums along with the compilation albums Gala and Topolino on various colored vinyl. Each sleeve features pretty much the original album artwork and notes, but slightly remixed and altered to fit the prints. Each sleeve is of a nice thick paper and very skinny, yet not flimsy. All the records are colored and have amazing sound honoring the original mixes. Itâ€™s all collected in a very nice colored cardboard box and was supposedly limited to 2000 copies.

The band started with three epâ€™s, Scar, Mad Love, and Sweetness and Light. These early releases exploded upon the UK indie rock scene and they were quickly hailed as one of the â€œbrightest actsâ€ coming up in the 90â€™s. These were collected and released as the Gala compilation for international sales. This is a fantastic collection of songs and it really showcases just how good the band was right from the start.

Miki is a terrific singer and she soars on opening track â€œSweetness and the Lightâ€. Accompanying her is the very mellow, yet superb backing vocals from Emma. The guitar licks on this opening track set forth what is to come for the rest of the album, swerves of color and pretty noise. â€œBreezeâ€ is a fan favorite and gives off a sunny summer vibe, â€œDe-luxeâ€ has a slightly Smashing Pumpkins rhythm and style, and â€œThoughtformsâ€ has great vocal harmonies with scratchy guitars and pitter patter drumming thatâ€™s easy to nod to. It all coalesces into an eargasm once the song â€œScarletâ€ drops and things get ushered into a dizzying array of almost psychedelic tones.

In the end an excellent debut and the start to something wonderful.

Spooky was produced by Robin Guthrie of Cocteau Twins and with that came a wall of sound and atmosphere, which if you have ever listened to Guthrieâ€™s band, you should know is pretty euphoric and washed in a druggy haze.

Depending on who you ask, Spooky is often mentioned as the fan favorite, but thereâ€™s a bit lost here that was so nicely captured on those early releases. Guthrieâ€™s production did a solid for the bands overall sound, but missing was a bit of that youthful energy.

Opening track â€œStrayâ€ starts the album on a glide down deep seas of volume and ethereal soundscapes. This style flows through every track, and while nice and surreal, things can get a bit tepid while jamming. But thatâ€™s the point of Shoegaze/Dream-Pop right?

Fourth track â€œCovertâ€ has a sort of weird swirling church organ sound that seems to keep moving in a loop while the track â€œFor Loveâ€ almost abandons the previous styles and ends up sounding more like a decent pop song with great bass rhythm and vocal harmonies. â€œSuperblastâ€ is a shredding tune though and it gives the listener a kick in the eye. The guitars clash together in a lightning storm of riffs and blasts. Chris Aclandâ€™s drumming is the highlight, smashing and bashing with ferocity while keeping pace before ending on a fadeout.

1992 was a big year for Lush. Spooky received good praise in the musical press and the band toured quite a bit, even ending up as the main stage opening band on that yearâ€™s Lollapalooza. Grunge was picking up though, and Lush didnâ€™t really fit in with that growing trend. Thatâ€™s a good thing, but other decisions negated that with future changes to comeâ€¦

Split came out of frustrating recording sessions handled by different producers. 4AD didnâ€™t like the mixes and the result is a scrambled sounding album. Two singles were both released at the same time, â€œDesire Linesâ€ and â€œHypocriteâ€. Despite bands sometimes having so-so albums, you can usually find a couple or more good tracks. These two singles are perfect examples.

â€œDesire Linesâ€ is like a diving into a lucid dream where the music takes you to places youâ€™ve never felt. It touches on synesthesia in such a way that even if you donâ€™t have that neurological phenomenon you might feel like you do. It stands out as the bands most well written and best recorded song. Headphones are a must when listening.

â€œHypocriteâ€ is another great catchy tune and a fan favorite as well. Miki sings with a snarky attitude all the while sounding as angelic as possible which makes for a pretty fun time. Finally, thereâ€™s also the track â€œLovelifeâ€, a deep album cut that should have also been a single. Itâ€™s instantly welcoming and can make the listener hum along with the vocals.

Split was the last traditional sounding Lush album made until their 2016 ep. Things changed after this.

This was the last album with Lush going full on Brit-Pop mode. The change had comeâ€¦

Itâ€™s not a terrible album, and while it does have some good radio friendly singles that are decent for being a part of the 90â€™s second British invasion, itâ€™s not what the fans expected. â€œSingle Girlâ€ is the standout with goofy fun lyrics while â€œLadykillersâ€ has Miki showcasing a more open attitude, not shying away and hiding behind the instrumentals in her vocal approach.

â€œ500 (Shake Baby Shake)â€ is a cutesy song and catchy, but comes off a bit immature and not what one would expect from a mature band like Lush. Itâ€™s draws the line from intimate soul searching to full on chart seeking, radio friendly pap.

And just because they could, they get Jarvis Cocker of Pulp fame to do guest vocals on the track â€œChiao!â€ and itâ€™s not good at all. It comes off as pandering to the Brit-Pop scene. Lovelife is a bit oddâ€¦

With the radical change in style and sound, Lush entered into territories already conquered by bands like Oasis, Pulp, Suede, and Blur. It helped them get the highest selling album of their career, but by 1997 Brit-Pop was fading and the bloat of the late 90â€™s was changing into a many headed Hydra of bad fast food pop music.

Topolino was included in the box set on vinyl for the first time. Itâ€™s another compilation album released in Japan and contains singles from Lovelife and a few B-sides. Itâ€™s a continuation from the bands last era and nothing that special. The album artwork is charming though and reflects a bit of the excess of the mid 90â€™s.

After trying their hardest to tap into America instead of capitalizing in the UK, Lush tired out and kept quiet for a bit. In 1996 a month after their final performance Chris Acland committed suicide. The band announced they were breaking up in 1998.

Lush were the last of the big Shoegaze bands to reunite. Drummer Justin Welch of Elastica came on board and the band saw a resurgence in popularity. They rehearsed and released new music and started touring again playing festivals and intimate venues.

The importance of Lush being back together is about the love of their old and new fans and the connections they made. They were never forgotten and were always mentioned in conversations when speaking about the Shoegaze genre, thus the cult status. They also stood out by having two female vocalists and lasting longer than their peers in niche genres.

Now is the perfect time to give them a listen if you havenâ€™t before. Enjoy the ride!

(*Note* 4AD also released the entire discography on cd as the Chorus set. It contains all the albums mentioned here along with more B-sides, remixes, demos, and Peel sessions.)

Against Me!: Live in Grand Rapids