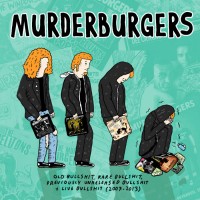 It still boggles my mind a little that the Murderburgers got signed to Asian Man Records. Not that it was undeserved â€“ far from it â€“ but it still seems a little incongruous: the American label that launched the careers of some of my favourite bands signing a bunch of upstart Scottish punks that Iâ€™ve seen play in venues you could generously describe as cosy.

The album kicks off all the way back in 2007 with a couple of tracks from the bandâ€™s rough and ready early demos, swiftly followed by 2009â€™s Semi-Erect, Semi-Retarded, Semi-Detached full length in its entirety. Like pretty much every pop punk band of the last 25 years, the young Murderburgers owed a sizeable debt to the Ramones, but they sound a lot more like the Ramonescore bands that followed than the originators themselves. Fraser formed the band after seeing the Queers play, and it shows â€“ they cribbed so much from the Weasel/Queers playbook there was little room left for originality.

All the calling cards are present and correct: riffs ripped straight from the early 90s Lookout catalogue; songs that spell out words in the chorus (â€œPanic Attackâ€); short songs insulting all and sundry (â€œYouâ€™re A Prickâ€, â€œAloha, You Suck!â€); even shorter songs about hating work and not giving a fuck (â€œI Hate My Jobâ€, â€œSocial Leperâ€). And just like Ben Weasel and Joe Queer, Fraser occasionally interrupts the profanity with an unabashedly sweet love song like â€œDouble Takeâ€. There are also not one but two songs in the great â€œsomeoneâ€™s got a somethingâ€ punk tradition (think Johnny and his problem, or Gary and his boner) â€“ in this case â€œBrianâ€™s Got An ASBOâ€ and â€œStevieâ€™s Got A Problemâ€.

The next batch of tracks, including the whole of 2010â€™s Burned Out / Worn Out album along with songs from various splits and compilations, display some hints of musical progression. Track lengths begin to increase, a little of the youthful vigour fades, and the song writing quality starts to pick up. The band still sound like theyâ€™d fit seamlessly into the classic era Lookout roster, or more recently that theyâ€™d be right at home on Itâ€™s Alive Records.

After a set of live-in-studio recordings, including the neat little instrumental intro â€œItâ€™s Burger Timeâ€, there are a couple of covers â€“ Ramones, obviously, and a light-speed take on the Descendentsâ€™ â€œCoffee Mugâ€ â€“ by fellow Scottish punks Cleavers with Fraser on guest vocals.

The album closes with an energetic live set recorded at Audio in Glasgow, a venue Iâ€™ve seen the band play several times, although I wasnâ€™t at this particular show. Showcasing songs from 2012â€™s How To Ruin Your Life, the live tracks are the pickles in this musical burger â€“ a welcome addition but not strictly necessary. But they do showcase a growing maturity, more lyrically than musically. Fraserâ€™s writing takes a darker turn â€“ fewer songs about girls, more songs about anxiety, depression and lack of work and life prospects. â€œAll My Best Friends Are Dyingâ€, which would show up on their impressive Asian Man debut These Are Only Problems may well be the best song theyâ€™ve written to date.

Even at a full 60 tracks, Old Bullshit isnâ€™t quite exhaustive as it omits several songs from those early demos, Fraser presumably having cherry-picked the ones heâ€™s not overly embarrassed by. But honestly thereâ€™s nothing to be ashamed of here. Yes, the earliest stuff is juvenile and derivative but importantly itâ€™s also fun. Ordered chronologically, the compilation allows you to trace the bandâ€™s journey from scrappy Scottish-accented Queers sound-alikes to, er, slightly less scrappy Scottish-accented Queers sound-alikes. Iâ€™m being facetious, of course â€“ by How To Ruin Your Life they were well on the way to finding their own sound, as demonstrated by the live tracks from that era. Thereâ€™s still a heavy Lookout influence, but itâ€™s combined with a uniquely Scottish sense of humour and self-loathing. If I were them, Iâ€™d call the next album Songs About Drinking And Drudgery.

Inevitably with such a large compilation, thereâ€™s a little repetition. There are three versions of â€œMoronâ€, for instance, and several other songs show up twice. But Old Bullshit is a lot of burger for your name-your-price buck. And for such a meaty burger, thereâ€™s very little gristle here.