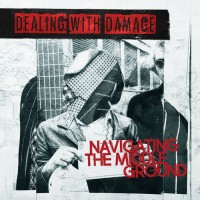 Itâ€™s always interesting when a handful of old timers get together to produce some new music and Dealing with Damage is no exception. With a collective C.V. which reaches back into the 1980s and includes The Stupids, Sink, Done Lying Down, Chocolate and K-Line amongst others, this is a band with a strong pedigree and one that has much potential on paper.

That potential is quickly realised in the opening track, â€˜Some Colours Never Fadeâ€™, which begins with an intro that reminds me of that on Down by Lawâ€™s â€˜Independence Dayâ€™ and is a song which identifies that some of the things that got these guys into punk in the first place remains as strong today as it ever was. For someone who reached fifty years of age in the past year, itâ€™s a sentiment I wholeheartedly agree with. The added bonus here is that Ed Wenn, a.k.a. Ed Shred in his younger years, provides the vocals, someone Iâ€™ve long been a fan of for his distinctive delivery, and the mid-tempo track is full of melody which takes up residence in my head with relative ease.

â€˜When I Grow Upâ€™ is the most in your face track and has a snotty feel to it as it races along falling just short of the two minute mark. Next is â€˜Turn & Stumbleâ€™, a track which is the closest to what K-line were like some years ago with a slightly angular path defining it. Following on is â€˜Strange Melodyâ€™ which reminds me of Trusty, and there is no doubt that underpinning the whole of Navigating the Middle Ground is the sense that Dischord Records has had an impact on the individuals in the band.

The penultimate song is â€˜One Foot In Front of The Otherâ€™ and it retains that Trusty comparison being a jaunty singalong affair that grows into a real earworm.

And finally, â€˜Let The Mystery Beâ€™, is a cover which had me searching the internet to hear the original and I really had no idea what to expect. It ended up being a track by American singer/songwriter Iris DeMent which has also been covered by 10,000 Maniacs and more recently used in the television programme The Leftovers. Itâ€™s fairly true to the original and provides a soothing conclusion to the release.

I found Navigating the Middle Ground to be uplifting both in terms of the quality of the songs and their delivery, a really pleasant surprise. I hope that Dealing With Damage doesnâ€™t end up being a one-off project as Iâ€™d happily listen to more from them.

This is available via Bandcamp and doesnâ€™t cost much at all, so well worth checking out.