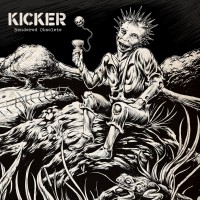 Whatâ€™s most striking about Kickerâ€™s second LP, Rendered Obsolete is how the band is branching out, right under our very noses. At first glance, Rendered Obsolete is very much a sequel to their excellent debut, Not You. The band still pays homage to the golden era of punk rock, snapping between a Sex Pistol-ey dedication to rock in its purest form and a UK82 style hard smash. This music is fast and vicious, but perhaps unlike contemporary bands, Kicker arenâ€™t ashamed of the rock in punk rock and use Jerry Lee Lewis and Little Richardsâ€™ invention to great effect- albeit the invention is shrouded in beer covered spiked leather and denim.

Frontman Pete the Roadie, who has made a career of rodieing for punk bands including Subhumans, Amebix, Jello, and Fugazi since â€™78 is still in pure Pete mode. Peteâ€™s greatest asset is that there is no artifice in his delivery. Pete is an English bloke that has made a living out of supporting the punk titans and heâ€™s fully aware of the virtues and vices of this lifestyle. By osmosis, Pete has absorbed the style of the early crusty crew without falling prey to imitation. When Pete bemoans the destruction of the modern workforce on the title track, heâ€™s barking and spitting like Dick Lucas and Steve Ignorant, but it doesnâ€™t sound like heâ€™s trying to sound like those guys- it sounds like itâ€™s coming from his gutsâ€¦ and thatâ€™s because it is. Fully aware of his station, Pete revels in the trappings that make punk so great, lovingly snapping hard refrain and shredding his vocals as songs tumble to the end, but heâ€™s fully aware that punk rock does have humor about itself and for every finger point, Pete is sure offer a wink at the audience.

The band too, is in fine form. Guitarist Mauz who rose to (punk) fame in Dystopia flexes his anarcho-meets-crust chops. â€œBrown Breadâ€ is built around a classic gothic spiral, but â€œFull Englishâ€ is a full on charger, with Mauz supplementing skill for violence, and it works. Bassist Dave Ed likewise shows why he can roll with the Neurosis crew and with the JFC gang. Ed is the champion of ambiance (as heâ€™s shown time and time again in his main gig) but heâ€™s also able to shift to a classic snappy punk jig. This skill keeps the music heavy, but also keeps the momentum going. Likewise, drummer Toby, who recently stepped down from his Kicker duties, seemingly realizes that this is his curtain call and really bashes those skins. But, Toby quite masterfully, plays drums like drums should be played. When the songs need room to breathe, he backs off. Yet, when noise is required, Toby brings the heat, resulting in a dynamic sound that few hard records really have.

But, for all the bandâ€™s classic technique, the slyly disguise their real play here. Yes, the band still are stalwart defenders of punk and all the warts that come with it. But, theyâ€™re also interested in growing this thing from within. You need look no farther than opening track than â€œYou canâ€™t take me anywhereâ€ to hear that the band is getting a little rowdier and is more likely to fly off the hinges. They still stick to a three chord smash, but at the songâ€™s edges, the band strays away more and more, resulting ina noisier and more intense release. Likewise, the aforementioned â€œBrown Breadâ€ flirts with an almost metallic style without being metal. â€œTimeless Clichesâ€ has Mauz and Dave Ed taking their instruments and wandering away from the beat, only to rush back, resulting in a hard driving number the ever-so-slightly suggests an affinity for unusual composition ala Zappa, Beefheart, and Residentsâ€¦

Pete, too, has become more wiry. â€œTimeless Clichesâ€ has Pete on the edge of a nervous breakdown and â€œFull Englishâ€ finds him steadfastly demanding breakfast preparation. Sure, itâ€™s a little silly, as itâ€™s supposed to be, but whereas older tune â€œLager and Chipsâ€ was an ode to how great the meal is, â€œFull Englishâ€ is angry demand. He also takes a more direct political stance than before, popping shots off at Trump and other blustering politicians.


Thereâ€™s still a great deal of fun to be had here, but if you really focus, the band seems to be looking deeper towards themselves. And thatâ€™s really the trick. As you find yourself pogoing across the room with a lager in your hand, you might pause, for a second, and find something truly profound in a hard-traveled punkâ€™s breakfast order. Kicker isnâ€™t going to spell it out for you, and thatâ€™s why this band is both classic and unqiue.