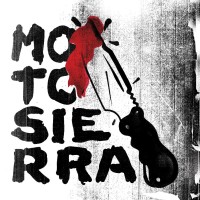 The spirit of MotÓ§rhead is alive and well in Uruguayâ€™s Motosierra. Now for the first time in the bandâ€™s nearly 20 year history, North American audiences will be able to experience the power and the perversion of one of South Americaâ€™s best kept secrets. For those whose Spanish has gotten a little rusty, Motosierra means chainsaw in English. Itâ€™s also a pretty good description of their sound. The guitars buzz and the music rips and tears. Itâ€™s the attitude of punk combined with the aggression of metal.

A-side, â€œBuzo Nuevoâ€, translates to something like â€˜new SCUBA diverâ€™ or â€˜new coverallâ€™. While its meaning might not be clear, musically itâ€™s definitely got a MotÓ§rhead swagger. The vocals are definitely wilder and more over the top than anything Lemmy did. B-side, â€œLa Marcosâ€, literally means The Mark. Yes, itâ€™s as cocky as it sounds. Itâ€™s braggy and fun and appears to be about singer Marcos Motosierra. Itâ€™s along the lines of the pseudo arrogant Dwarves stuff. Musically itâ€™s closer to the faster, punkier Dwarves stuff too. Some of their previous stuff was pretty overtly sexual too. (Also like The Dwarves.)

Fans of the previously mentioned bands are probably going to want to check theses guys out. Fans of bands like Zeke, Turbonegro and Valient Thorr will likely enjoy it too. These two songs should serve as a good introduction to US audiences. They prove that thereâ€™s no such thing as a language barrier when it comes to loud, kick-ass rock and roll. If youâ€™re a vinyl fiend, donâ€™t delay. Motosierra is limited to 500 copies on wax worldwide.Â

Dinosaur Jr.: Give a Glimpse of What Yer Not