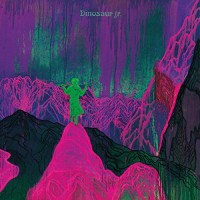 Itâ€™s barely even worth mentioning that this is Dinosaur Jrâ€™s fourth reunion record, because with nearly a decade reunited I think itâ€™s safe to say they are a real band again and not just jumping on the reunion bandwagon to make a buck. But the best part is that all these reunion albums have been solid, if not great. The original trio of J Mascis, Lou Barlow and Murph have made more records together in the 2000s now than they did in their original 80s run before Barlow got the boot.

Give a Glimpse of What Yer Not hits hard up front, with the chugging â€œGoin Downâ€ and the bouncy â€œTiny,â€ introduced to us through an amazing video featuring roller derby and an adorable and talented skateboarding bulldog. Both songs tick all the boxes of a great Dino song: interesting but not annoyingly complex guitars, head-bobbing beats, and great melodies in Jâ€™s signature creaky croon. It had me hopeful that Glimpse would be a step back up after 2012â€™s I Bet on Sky, which was a bit light and slow, at least by Dino standards.

â€œBe a Partâ€ does mellow things out in the number three spot, but after a smooth gliding guitar intro, the beat takes off while things still retain a lighter feel. The record cranks back up with â€œI Told Everyone,â€ just as a good Dino tracklist should. They get downright Sabbath-sludgy on â€œI Walk for Milesâ€ followed by the jangly â€œLost All Day,â€ with its catchy little guitar noodles and J crooning â€Oh baby, what went wrong / with you and me, you and me?â€

Lou Barlowâ€™s song contributing, â€œLove Isâ€¦â€ and â€œLeft / Rightâ€ bring the goods as well. The former mixes up the feel of the record thus far, with buzzing bass underneath acoustic guitar. Light electrics join soon after to accompany the signature Barlow vocal melody in the chorus. The later closes out the record nicely with single-string guitar riffs opening up into big chords, with soaring guitar sections, a great bridge melody, and a cool arpeggiated acoustic interlude.

Dinosaur Jr have been an incredibly consistent outfit since reuniting, and Give a Glimpse of What Yer Not is another solid addition to their catalog. A step up from I Bet on Sky, itâ€™s sure to please all Dino fans.Â

Prophets Of Rage: The Party's Over [EP]