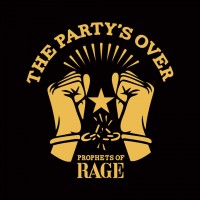 When it was announced that Prophets Of Rage formed earlier this year music fans in general seemed to be quite excited, especially fans of Public Enemy, Cypress Hill and Rage Against the Machine. Personally, I was and still am a massive Rage fan that is why I was more than interested in seeing what Prophets Of Rage could bring to the table. As more and more live footage of their performances made their way onto the internet I in turn lost faith more and more, but I thought I would at least wait until they put out a proper release before writing them off completely â€“ and now here we are. The Partyâ€™s Over should make dedicated fans of the band membersâ€™ respective previous musical ventures feel totally ripped off. Of the five songs on this release four songs are covers (three of which are live recordings) and one is a new song that was recorded in the studio.

The title track, the brand new, studio-recorded song is pretty much what you would expect from the guys formerly in Rage Against The Machine. It is based mostly on funky and hard-hitting riffs with B-Real and Chuck D yelling and rapping over them. The issue with the song (aside from it sort of dragging) is that it doesnâ€™t really go anywhere. There is a big build up a little half way through where you think there would be this big burst of energy at the breaking point, but instead it just goes back to the original chorus. It just deflates.

Again, the majority of the songs on this EP are covers that are live recordings and you would think that the production quality especially for a band with members of this caliber would be better. They covered Rage Against The Machineâ€™s â€œKilling In The Nameâ€ and it is a pretty straightforward rendition. There really isnâ€™t anything that stands out about this version compared to the original. They also cover Public Enemyâ€™s â€œShutâ€™em Downâ€ and it is always interesting to see how Tom Morello and the rest of the band manage to recreate the hip-hop beats with traditional rock instruments. POR cover the Beastie Boysâ€™ classic â€œNo Sleep â€˜Til Brooklyn,â€ but changed it to â€œNo Sleep â€˜Til Clevelandâ€ just in time to protest the 2016 Republican National Convention and it all sounds kind of tired. But in both â€œShutâ€™em Downâ€ and â€œNo Sleep â€˜Til Clevelandâ€ Tom Morello throws in these guitar solos that are too long, very self-indulgent and over-done with a ton of effects thrown in.

The main issue with The Partyâ€™s Over and Prophets Of Rage in general (thus far) is that the urgency is not there like there is in Public Enemy, Cypress Hill and Rage Against The Machine tunes. The members of RATM seem to be cursed because every time they have a different front man other than Zach de la Rocha, the quality of their music takes a nosedive (cough, cough -- Audioslave) and this is no exception. The feeling you get from this EP is that it is sort of bloated with talent thus making it all sound like they are trying way too hard while delivering very little â€“ almost as if they choked under the pressure of being a â€œsuper-group.â€ Bring back Rage or Street Sweeper Social Club and end this before it gets worse.

Dinosaur Jr.: Give a Glimpse of What Yer Not