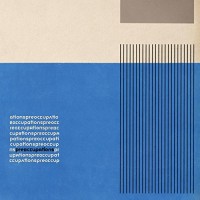 Preoccupations are nothing short of a psychedelic trip. After moving past their own internal turmoil as a band, coupled with a name change, they've continued down the road with their brand of distorted, buzzy noise rock that heralds the apocalypse. Their style of post-punk brings forth with it every ounce of tension and gloom creeping the world over and stands at your doorstep like the Grim Reaper checking his watch. While Viet Cong (RIP)Â was a fucking stunner of an album -- an impending march of war -- Preoccupations finds itself lingering in the aftermath. The fallout's best described by the first and third tracks on the record -- "Memory" and "Zodiac") -- Â which really highlight the tempo of the album. That said, with the sense of melody lost from a lot of what's on tap, this heavily-dissonant approach just falls short of the mark.

"Continental Shelf" is the song that sets the mark for this band and will always be the litmus test I judge them by. Hazier than say, Kite Party. But focused and filled with intent as say, Ceremony. "Degraded" is another example of this jagged sound. There aren't as manyÂ deep hooks as first anticipated but there are a lot of sharp jabs which fans of the Banshees can cling to. While they still don't come off as by-the-numbers, Preoccupations find themselves wandering territory that's too dour for their strengths musically. This atmosphere is created as a result of the synth-heavy, nervous and spooky vibe they take, sacrificing a lot of rhythm along the way for bleaker lyrical content. "Stimulation" tries to kick the back-end to life and it holds up to another great track from last year in "Silhouettes" Â -- spastic and intricate guitars galore. But by then it's a little too late. Overall, the album isn't a bad listen. Symphonic. Orchestral. But compared to the last outing, it's lacking. Nonetheless, Preoccupations hits you with the dark beauty of a Nick Refn movie, whose visual aesthetic here is combined with the emotional weight of a Terrence Malick movie. Not bad but not up to my high expectations.