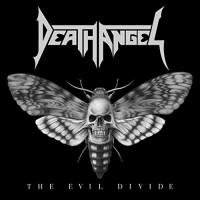 In the 1980â€™s, Californiaâ€™s Bay Area was ground zero for thrash metal. Exodus, Testament and later Metallica all called it home. One of the more overlooked and underrated bands from that scene is Death Angel, originally formed in 1982 by guitarist Rob Cavestany. The classic lineup would eventually consist of five cousins, all of Filipino descent. Their 1987 debut LP The Ultra-Violence is considered a masterpiece of the genre. Some bad luck and a lack of commercial success led Death Angel split up in 1991. They reformed a decade later for a one off benefit show for Testament singer Chuck Billy, who was suffering from cancer at the time. They were so well received that theyâ€™re still at it 15 years later.

The Evil Divide is the bandâ€™s 8th studio album overall, and 5th since reforming. In 2016, only Cavestany and singer Mark Osegueda remain from the vintage version of Death Angel. The two of them certainly prove that theyâ€™ve still got a passion for thrashinâ€™. Musically itâ€™s similar to Exodus, and also seems to owe a debt to East Coast contemporaries Anthrax and Overkill. Itâ€™s fast and precise with great riffs and plenty of ripping solos. Osegueda has a voice that can reach up and hit the high notes, but he also sometimes uses a hardcore type shout. (Think DRI or Madball.) Lyrically itâ€™s also along the lines of Exodus and Overkill. Thereâ€™s songs about self-empowerment and lots of scary metal themes about good and evil etcâ€¦

All ten of the tracks on The Evil Divide are really solid. Opener â€œThe Mothâ€ is fast and precise and quite melodic. It inspired the LPâ€™s title as well as its cool Silence of the Lambs-esque cover art. Closer â€œLet The Pieces Fallâ€ is the albumâ€™s longest and most musically ambitious. â€œIt Canâ€™t Be Thisâ€ is one of the recordâ€™s strongest songs and is a good example of the more hardcore vocal approach. Other personal favorites include â€œLostâ€, â€œFather of Liesâ€ and â€œBreakawayâ€.

For those of you keeping track at home, 2016 is shaping up to be a great year for classic thrash. Weâ€™ve already gotten outstanding new albums from Anthrax and Megadeth, and even a killer new EP from DRI. Soon we will have very promising sounding new LPâ€™s from Metallica and Testament. You can add The Evil Divide to the list of this yearâ€™s essential thrash releases. Iâ€™ve been a fan of this music since its first wave, but never really listened to Death Angel. Hearing this album definitely makes me want to go and dig into their back catalogue.