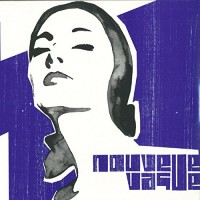 Nouvelle Vague is a French Bossanova band known for having multiple female singers and for covering 70â€™s and 80â€™s New-Wave and Post-Punk.

Taking a unique style of Lounge music, Nouvelle Vague bring an interesting quirkiness on their 2004 self-titled debut album and itâ€™s done without a wink or notion of being hip. The truth behind this idea was when musicians Marc Collin and Olivier Libaux came together with the idea to cover Joy Divisionâ€™s â€œLove Will Tear Us Apartâ€ Bossanova style. After accomplishing their goal, they then went on to cover even more songs they were fond of and thus Nouvelle Vague was born.

The song selection on this album is pretty great overall. You have notable tracks like the mentioned â€œLove Will Tear Us Apartâ€ by Joy Division and â€œGuns of Brixtonâ€ by The Clash, but then you also get some deep cuts like â€œFriday Night Saturday Morningâ€ by The Specials, â€œA Forestâ€ by The Cure, and an amazing version of â€œJust Canâ€™t Get Enoughâ€ by Depeche Mode.

Interesting fact, of the 13 songs covered here (15 on the special edition) not one of the eight female singers had ever heard them. That might sound crazy, but what it brings to the table is a sort of honesty to the music and a desire by the creators of this group to pay tribute to these original songs by artists they respected from long ago.

Only minor complaint is at points the female vocalists all start to sound the same, but their whispery performances give the songs a fresh air feeling and can make you relax in those late night hours, so itâ€™s not really that big of a deal.

Other songs covered on this album include:

â€œIn a Manner of Speakingâ€ by Tuxedomoon

â€œMaking Plans for Nigelâ€ by XTC

â€œMarianâ€ by The Sisters of Mercy

â€œSorry for Laughingâ€ by Josef K*

and the always awesome, "This Is Not a Love Song" by Public Image Ltd.

Sit back with a cheap beer, put this record on, and try to get past the fact that you are listening to familiar songs sung in a completely different style and be amazed by how IT WORKS! Also good headphones are a plus. Dig itâ€¦

(*denotes songs from the special edition of the album)