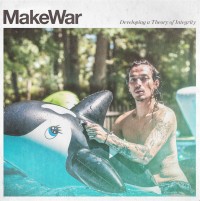 Developing A Theory Of Integrity (2016)

MakeWar's last album (self-titled) was a transitional one and all about an identity change. Moving from the acoustic days of Sad and French into something that emo/indie/pop-punk fans would enjoy. Developing A Theory Of Integrity is the payoff of that gamble and one that really puts them out there as a band you shouldn't let slip under the radar this year. I expected something decent but this album blew expectations away.

"Ode" is jam packed with the energy of Taking Back Sunday and Brand New, especially in their early days. Fizzy, bouncy and melodic. The singles released are definitely the strongest elements of the album with "Tiger Lili" proving just why there's a strong Jesse Lacey comparison. And if not, then another Taking Back Sunday parallel crops up in the throaty vocals of John Nolan. Oozing with passion and a punk intensity that's as catchy as it is spritely. Â Huge choruses and big hooks which really expand their sound from the last go. "Don't Panic" and "Distractions" are two other addictive jams that really highlight how good MakeWar have gotten and how far they've come from MakeWar. They live up to every bit of potential, with the weaker songs still palpable. "Sallie" stands out the most as the biggest anthem on the record that'll have you singing along and shouting with friends with a cooler of beers and a ride home at sunrise sure to cap a beautiful night.Â Â Flawed at times? Yes. But still easy to ignore because what pops off on the majority of tracks really earmark this band as one meant for bigger things, soon.Â