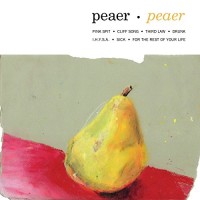 Peaer is abstractly interesting. I mean look at their name for example. Their new self-titled album is perfect background music for anything you plan to do this fall but is also great for an intuitive listen that will tickle your brain with excitement. Peaerâ€™s breed of indie rock in the veins of Tigers Jaw or Pedro The Lion is something you need to hear for yourself. Its not overtly edgy but it will make you praise the simplicity that makes up their sophomore album.

Peaer spends a lot of time suspended in the abstract sounds of thinly fuzzed guitars and drums that sound like theyâ€™re clouds. â€œCliff Songâ€ suspends listeners between the sounds that is Peaer. The songâ€™s light drums that gain momentum in and out with a guitar that never stops surprising is an indie rock gem. While I favor the second half of this record more, the first half has some choice selections that showcase just how good Peaer really is.

â€œDrunkâ€ is where the album really started to draw me. The song sounds simple enough with tightly locked in drums, bass and guitar that really drives the sound of such a lo-fi kind of song. â€œI.H.S.Y.A.â€ is when the band gets into their math rock territory. The riff is consistently changing while it stays on the same wavelength the entire song.

â€œSickâ€ has a nice lowkey melody that sounds like it could be an old Tigerâ€™s Jaw song. â€œFor The Rest Of Your Lifeâ€ is the albumâ€™s epic conclusion that is well worth the wait. The song is the band at itâ€™s most melodic and cheery while still maintaining the vibe of the rest of the record. The riff that repeats at the end of the song sounds like someone was messing around with The Strokesâ€™ â€œYou Talk Way Too Muchâ€ and made it more abstract.

Peaer proves on their sophomore album that they can create complexity within abstract simplicity. The album has a great vibe that makes every song stand out in one way or another. The bandâ€™s blend of delicate indie and math rock will surely be something interesting to listen to no matter what way you interpret it.

MakeWar: Developing A Theory Of Integrity