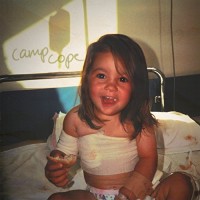 The internet's a crazy fucking place. I stumbled across Australia's Camp Cope checking out PUP's live performances of "DVP" online and in a related video, there stood this Melbourne three-piece. Three kickass ladies covering "Maps" by the Yeah Yeah Yeahs. All with an indie spin that hit just the right notes. So to their bandcamp I headed. And I was blown away. The opener off Camp Cope was something that felt 100% like a Hop Along jam and yeah, it was love at first decibel.

I kid you not about that song. "Done" is a driving indie-rock jam with so much passion from vocalist Georgia Maq. Her vocals bear an uncanny resemblance to Frances Quinlan here. You get more of their Hop Along vibe on "Lost (Season One)" but the real magic comes on the slow burners. The songs where Maq is quietly intense and building off thick basslines and tight percussion. "Flesh & Electricity" and "West Side Story" are examples of these jams, with her accent emerging more. I implore you guys to check out these eight songs. They run around the four minute mark on average but are really addictive. "Stove Lighter" -- an old demo that's been reworked -- feels like one of those raw, Midwest emo tunes that grates away at your humanity to help bookend things on Camp Cope. Without spoiling too much, let me just say that the final track is an acoustic that melts away at you. A gem for fans of Frank Turner called "Song for Charlie" and it embodies the spirit and warmth of this album. A hidden gem that runs its course over family, relationships and religion. Heartwarming to say the least.Â