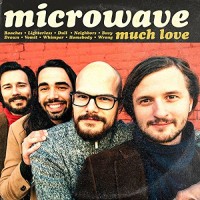 Atlanta's Microwave are definitely one of 2016's best-kept secrets. Well, for me. I discovered them at Riot Fest Chicago and was completely blown away by their set. Absorbing and charismatic to say the least. I dug back into their archives and loved the stuff they did with Head North as well as their last record, Stovall. Whatever promise they showed back then, their new album, Much Love, impressively builds on and sees them living up to expectations.Â

They meld quite a bit of sub-genres together which really strengthens the dynamic from Stovall which, as good as it was, felt a bit rigid. If you're into post-hardcore/grunge bands like Sainthood Reps, Citizen, Balance and Composure and Daylight, then you'd dig the opener in "Roaches." One of the biggest comparisons I'm yet to hear though (and it really comes off strong on Much Love) is how they sound like the poppier aka very VERY early era of another Atlanta gem in Manchester Orchestra. At times, vocalist/guitarist Nathan Hardy even expresses himself with the vocal idiosyncrasies of Andy Hull. "Lighterless" is an example of this.

The highlights don't step there though. "Neighbours" kicks ass with a wispy intro that flows into a buzzy hard-rock anthem that had me also thinking of that contemporary sound Taking Back Sunday are rocking. "Busy" and "Drown" are further testaments to this -- uptempo jams that really show how Microwave are a band that's non-formulaic. Then you've got the emo banger in "Vomit." This is their soft-loud duality at its best that crashes into you with a chaotic ending. I'd like to see them explore more of this side in the near future.Â

The mid-record shines the strongest with the back-end slightly tapering off. However, the closer puts us right back on track. "Wrong" is low-key and lo-fi -- very rough, grainy but engulfed with soothing guitar melodies to wrap you up and send you off into the sunset. Tyler Hill's bass and Tito Pittard's drums complement this like pats on the back to see you off and really bring full-circle one of the most heartwarming alt-rock/punk/post-punk novels I've heard this year. Â Flaws? Of course. Much Love isn't perfect as a couple items don't grab you but whatever works, wins in spades. Don't sleep on these guys.Â

Balance and Composure: Light We Made