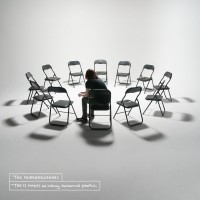 Three years on from their last release, Scotland-based pop-punk act The Murderburgers come roaring back with their next, highly anticipated, full-length â€œThe 12 Habits of Highly Defective People.â€ Twelve songs of highly emotional and cathartic pop punk that is more hit than miss- from the catchy yet manic song-writing, up to the album cover which, I'm not ashamed to admit, makes me slightly uncomfortable- this is a must for fans of The Gamits, mid-to-later Useless ID, or maybe a slightly more serious (yet still neurotic) Nerfherder.

You can tell from the opening track, â€œNow That You're Not At #21,â€ that the trials and tribulations of life have definitely informed this album. A fun and fast song that speaks of friends that are no longer there, whether physically or emotionally. There isn't a bad song on this album, but neither is there perfection.

It is hard to say that any song comes across as deep and meaningful because, lyrically, they all hit those points. Assuming that level is already our starting point, tracks such as â€œI Used To Hate That Life,â€ and â€œOpium Bombs All Aroundâ€ feel even more personal than the others, the emotion is so strong. Meanwhile, â€œMy Bones Are Full Of Holes,â€ and â€œLung Capacityâ€ are fast and furious tracks, full of energy and speed. â€œShe'll Be Filed Awayâ€ is one of those stand-out songs that is a bit more mid-tempo but is truly exceptional in all aspects of composition.

The Murderburgers have been through a lot since their last release. Turnover in the band has left guitarist-vocalist-songwriter Fraser Murderburger as the sole founding member of the band, and assistance over the past year as friends stand in when needed has kept the band afloat. This album actually features a slew of session musicians that few artists could hope to ever have on-hand. With Zach Gontard of Dear Landlord as well as Yellow and Red from Masked Intruder all stepping up to fill out the band on the recording of this album, its pedigree is already assured. Couple that with recording and producing by Matt Allison at Atlas Studios, and you are guaranteed a great-sounding album. With all of this in mind, this album isn't perfect, and the flaws just keep it from becoming an essential addition to anyone's catalogue.

As mentioned previously, the songs are well-composed. But many seem heavily reliant on Fraser's lyrics and vocals. Enough so that there were several which seemed to just dwindle off once the lyrics were exhausted. Few seemed to continue after the singing was done and then stop organically, and it feels as if the instrumentation could've played a slightly bigger part at the end of many songs.

Production is what you'd expect from Atlas Studios, and the timing and quality of backing vocals is generally excellent. Yet the final track, â€œMy Staple Diet of Rice, Vitamins & Painkillersâ€ (which is for the most part outstanding) features slightly too over-produced backing vocals, with what sounds like a digital effect added, and snaps the rapturous effect that the straight-forwardness of the rest of the album instills on the listener. At the very end of the album, I was kind of let down by that effect.

While not a classic, â€œ12 Habits...â€ is still a great album to listen to. It builds on you more than hits you in the face from the start, and is a great addition to The Murderburgers' catalogue.