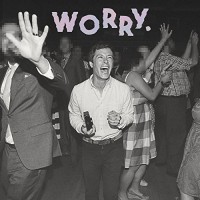 It's tough picking singles to highlight off WORRY. Everything Jeff Rosenstock touches turns to gold and here's another example why. The album's comprised of so many sonic signatures, it's damn hard to pin down. It's all over the place but in a good way as it prides itself on attributes and characteristics that can best be described as rushes of earnest shoutalongs, candidly told and catchily brought to life musically. All with a songwriting vulnerability like he's never shown before. It feels like it's made for loyalists and day-ones, but with an inviting presence for newcomers to sit back, soak in with some beers and wonder why the fuck they didn't hear about this dude before. This album's an arrogant, addictive son of a bitch to say the least. We Cool? felt like a bomb dropping in the background but this here, this is Jeff with a sheriff's badge coming out the salon, kicking open that door, guns blazing.Â

The record's everything you want it to be. Buzzy guitars. Twangy sections. Organs warming little nooks and crannies. Synth draped like curtains. A whole bunch of melodies clashing at various decibels, all decorating a house that's as warm as it is welcoming. From indie pop jams like "We Begged 2 Explode" to the power pop of "Pash Rash", it's a start that punches you in the gut. In fact, these songs are joined by the epic "Festival Song" to compose one of the best 1-2-3's I've ever heard an album open with. And it doesn't stop there. If you want to overdose on indie-punk, the latter track's accompanied by like-minded bangers such as "Bang On The Door", "I Did Something Weird Last Night" and "Wave Goodnight To Me". In fact, all of this feels like what Max Bemis tried to do when he converted Say Anything's style on Hebrews and failed. There's a radio accessibility that'll make fizzy tracks like "Festival Song" garner heavy airplay on college radio while those who're all anti-establishment will be kicking doors down to the hardcore punk jam in "Planet Luxury". I love the duality at play here with a range of emotions emerging, all naturally. Nothing ever feels forced or inorganic with a vast array of musical styles popping off here, there and everywhere. Jeff's cool, calm and collected at times. Then sacrificing this composure for raw anger and a raised voice at others. This song in particular is just 29 seconds long but focuses on the state of the world and the wars tearing society apart. Much more personal and hard-hitting than the other renditions on hand.

In a year where his bestie Chris Farren touted his own style of indie as immortal and Conor Oberst launched another personal missive on the world to follow up last year's Payola record from Desaparecidos, let's just say that it ain't a bad time to be a solo act. People are more open to hearing what you want to say. Albums like this beckon you in. "To Be A Ghost..." in its slow, acoustic build represents just why. It slowly sits you down before getting all rough and loud like a parent. The same holds true as "Blast Damage Days" goes from folky to a punk barrage. It's like Jeff's addressing what's wrong with us and telling us that the reasons we worry about the place being shot to shit, is because we're the ones pulling the triggers. Therapy in a nutshell. With 17 tracks to pick from, you're in for a delight and I honestly dare you to pick the highlights out. Too many. Just too fucking many. "The Fuzz" starts to wrap the show and again, it's anthemic and has you singing for hours on end. It encapsulates a lot of the album and indeed, it's a recipe to pick you up on the shittiest of days. Something for everyone, including a "Rainbow" for the ska-punkers who feel left out. Trust me, this is comfort personified, tastefully earworming you and then tucking you in. Let it happen and don't worry. It's all cool.