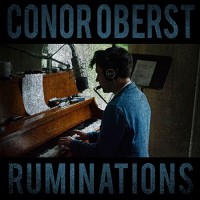 A description I read of Conor Oberstâ€™s new album, Ruminations, said that it was â€œcaptured over two wintry days in his Nebraska home, following the discovery of a cyst on his brain.â€ My admittedly unprofessional understanding of cysts is that theyâ€™re usually benign, so I went to the Internet for more research. Apparently what happened was that, while on tour with his political punk side-project, Desaparecidos, Oberst was suddenly forced to cancel 22 dates and admit himself to a hospital for laryngitis, anxiety, and exhaustion, with remarkably high blood pressure. An MRI during his hospitalization showed his brain to be â€œweirdâ€ and the doctors started to think that he might have something serious like pre-dementia. The Mayo clinic then found the cyst in his brain, which was actually the happy ending for the situation as he was told it was nothing to worry about, at least for the time being, and that it had probably been there his whole life. He was sent back to his home in Omaha to recuperate, where he wrote Ruminations over the course of the winter months. So what weâ€™re looking at is a record from someone who was forced to face his own mortality for a moment, and thankfully found out that everything was relatively fine. Thatâ€™s the frame of mind that Ruminations comes from.

Conor Oberst has, at times, been described as his generationâ€™s Bob Dylan, a comparison that some scoff at, calling it hyperbole, or pointing out how many artists have been referred to as â€œthe new Dylan.â€ But while Oberst is probably never going to win the Nobel Prize for literature, the comparison to Dylan isnâ€™t really inappropriate. Oberst is one of the most talented lyricists in indie rock today, he has a non-traditional singing voice, and he can be folksy when he wants to be. Ruminations is definitely one of his most folk-oriented albums, featuring Oberst alone with no backing band and only three instruments on the entire album: a piano, an acoustic guitar, and a harmonica. And like Bob Dylan, Oberst is political at times, and introspective at others. Ruminations, as should be obvious from the title and the situation surrounding the recording, is the most quietly introspective album of his career.

From the first line of the album, â€œItâ€™s a mass grave,â€ itâ€™s clear that Oberst is going to be giving us some ruminations about mortality, although thankfully the album is not exclusively about death. With such simple stark arrangements of just three instruments, the lyrics are front and center. Oberst is as strong of a lyricist as ever, with powerful imagery throughout the album. â€œGossamer Thinâ€ and â€œCounting Sheepâ€ stand out for Oberstâ€™s beautiful piano arrangements. â€œA Little Uncannyâ€ is destined to become the albumâ€™s biggest instant classic for being the most energetic song on the album, and for its references to 20th century historical figures, sympathizing with Jane Fondaâ€™s actions during the Vietnam War, taking shots at Ronald Regan, and mourning the loss of Robin Williams.

Oberstâ€™s three most recent releasesâ€”the lush pop-folk of his last solo album, Upside Down Mountain, the raging punk of his Desaparecidos album Payola, and now Ruminationsâ€”Oberst has proven himself to be one of the most versatile artists in indie rock today. If I had to pick, Iâ€™d say I preferred the fuller sound of Upside Down Mountain to the less-is-more style of Ruminations, but not by much. Ruminations is Oberstâ€™s artistic soul at its most vulnerable and bare, and it pays off with a powerful album and a wonderful testament to the power of simplicity.