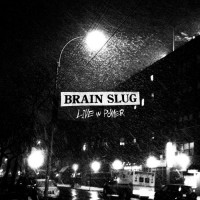 Brooklynâ€™s Brain Slug just released their latest offering in Live in Power. They certainly embrace the more aggressive and antagonistic aspects of the hardcore sound. The full-length blasts through fifteen songs in just over a half hour, itself a clue to the bandâ€™s blitzing musical pace.

The recording is pretty bare bones in production. With the exception of mastering done by Don Fury, there isnâ€™t much in the way of slick or polished engineering. But that actually sort of the suits the band. Their sound doesn't seem built for that type of recording anyway.

At first listen, Brain Slug come off like a prototypical noisy hardcore band with a bent towards punk. Lots of thumping drum beats provide the backbone to heavy power chords throughout Live in Power. I wish the band leaned a bit more on the structure in â€œTime Has Come/Written in Bloodâ€ as the song is the best example of the bandâ€™s ability to get a bit more expansive sound-wise.

For the somewhat derivative format in their song structure, they do a good job in keeping the guitar and drums rhythms fresh from song to song. The vocals offer little in the way of melody or catchiness. The recording does a great job in harnessing the anger vocally though. Iâ€™m reminded here of early Integrity or Celebrity Murders. Again, very fitting for the bare-bones musical style. There are choruses and even some gang vocals, but expect a mostly direct delivery that becomes most compelling lyrically. The band does however pull their style together well and do a strong job in keeping the sound itself diverse enough.

The lyrical content has depth that really helps elevate Live in Power. The band addresses a spectrum of topics from the personal to the political, and the lyrics themselves have a simplistic cleverness to them. â€œLast Man on Earthâ€ and â€œWinter in Americaâ€ both do well to exemplify Live in Powerâ€™s topicality. While there is certainly a minimalism to the lyrics on the in this area, Live in Power also came together for me as a release because of the lyrics.

This full-length doesnâ€™t reinvent anything nor does it lean on technical musicianship necessarily. But itâ€™s a great release if youâ€™re seeking something angry, honest, and fast-paced. Live in Power is up on Brain Slugâ€™s bandcamp for a donation price.