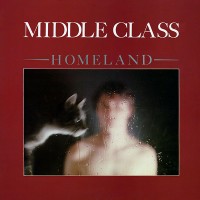 I dig deep when trying to find certain music. I like to speak with people who know more about genres or bands than I do. You can get a great community feeling when discussing the awesome qualities of different artists. If I canâ€™t find folks to speak with, I traverse the net and look at blogs and such. Such a place is where I discovered â€œHomelandâ€ by The Middle Class.

I was curious about this band. This canâ€™t be those same guys who made the awesome â€œOut of Vogueâ€ ep right? That one four song ep that paved the way for American hardcore? Well, after searching through Discogs I came to the knowledge that yes, this was the same freakinâ€™ band. This was going to be interestingâ€¦

Homeland is a Post-Punk record in the purest sense. Itâ€™s like the sister album to Joy Divisionâ€™s â€œUnknown Pleasuresâ€. Itâ€™s also incredible. To get a feel jump right in with album opener â€œThe Callâ€. The bass rift by Mike Patton carries that song, and most of the album with it. It harkens back to the production wizardry that Martin Hannett did for Joy Division, except this album came out in 1982 and it isnâ€™t as cold or calculating, which was a product of Joy Divisionâ€™s talent and Martinâ€™s maniacal style.

Second track â€œA Skeleton at the Feastâ€ is the song I first came in touch with on a random playlist. Itâ€™s almost too perfect a song in the Post-Punk style. It hits all the right marks, and maybe it gets a deduction for unoriginality, because these lads from Orange County REALLY liked Joy Division, but regardless itâ€™s a standout. Also singer Jeff Atta doesnâ€™t sound like Ian Curtis, which is a good thing, but instead has his own style and it fits the music perfectly like its own instrument.

There are other key tunes like â€œListenâ€ with its ferocity that is reminiscent of old Gang of Four and â€œMosqueâ€, a track that pounds the listener as if standing by the speakers in a small club watching the band on stage. The bass is once again a key figure on this song, which is great since all good post punk often has the bass heard more loudly in the mix. You can blame Public Image Ltd for that.

Lastly the album closes with â€œEverythingâ€ and itâ€™s not a slow burn funeral march, but as the track is titled, this is everything the band has done on this album all mashed together.

Homeland was the first and only LP by the Middle Class.

As with a lot of the old hardcore bands, The Middle Class didnâ€™t stay around for too long (1977-1983). They left the violent early days of the scene, changed up their sound and made Homeland, toured for a bit, then broke up. They reunited back in 2010 but officially called it after the tragic death of guitarist Mike Atta.

Give this a listen. Itâ€™s worth the time and appreciation. Dig itâ€¦