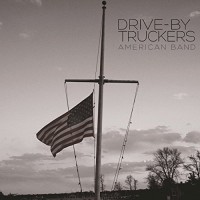 The Drive-By Truckers have shared an aesthetic (if not necessarily sonic) kinship with punk rock since their inception and chronicled â€œThe Night G.G. Allin Came to Townâ€ on 1999â€™s Pizza Deliverance. They return right in time for election season with the excellent American Band, an album that Patterson Hood recounts in the liner notes was influenced by the political spirit of The Clash. American Band is an album that invites the listener to dig deep into the lyrics and sidelines metaphorical fiction for straight-up documentary journalism to examine our current state of national affairs. The album demands a dialogue be initiated to examine our countryâ€™s recent events and reflect on â€œwhat it means.â€

With â€œit all started with the border,â€ â€œRamon Casianoâ€ kicks off the proceedings by dusting the cobwebs from a true story of one of the most notorious presidents of the National Rifle Association. It recounts the murder of an unarmed Hispanic youth by a teenage Harlon Carter after a dispute over alleged trespassing. Carter was convicted to three years in prison but won his freedom on appeal. Beginning as a decorated border patrol agent, Carter later was responsible for the NRAâ€™s rise to political prominence and saw membership triple under his years of leadership. Carter was also one of the first to spearhead the now entrenched NRA rhetoric of complete opposition to any form of legislation regarding guns. Trucker Mike Cooley takes aim against the recently inflamed anti-immigrant movement and at â€œmen whose trigger pull their fingers / â€¦whoâ€™d rather fight than winâ€ with the lament that â€œthe killingâ€™s been the bulletâ€™s business / Since back in 1931 / â€¦and Ramon still ainâ€™t dead enough.â€ The NRAâ€™s hardline stance on opposition to gun control simmers in the background of the events covered throughout the rest of the album.

Furthering the exploration of Americaâ€™s rash of mass shootings and firearm violence, â€œGuns of Umpquaâ€ is Patterson Hoodâ€™s dissection of the Umpqua Community College shooting through the eyes of US Army Veteran Chris Mintz. No stranger to the Pacific Northwest after moving to Portland recently, Hood initially paints an idyllic scene of â€œbirds soaring through the clouds outside my windowâ€ only to be punctuated by the â€œsound of shots and screams from the hallway.â€ Even a liberal stronghold like Oregon is not exempt from the gun violence that appears to be an all too common occurrence in American life. Mintz had â€œmade it back from hellâ€™s attack in some distant bloody war / Only to stare down hell back home.â€ Mintz blocked one of the doors the shooter was attempting to enter and was shot multiple times for his efforts. He reportedly begged the shooter not to kill him since it was his sonâ€™s sixth birthday. Mintz survived but 9 others did not.

As a South Carolinian, Cooleyâ€™s anthemic call-to-disarm â€œSurrender Under Protestâ€ strikes with particular resonance. Cooley examines the roots of the Confederate apologist mindset that influenced the mass shooting of black parishioners at Mother Emanuel Church in Charleston, SC by a disenfranchised white male. In the South, Cooley contends that racism is a seed carried â€œon the lips of trusted loved ones / To the lonely, fragile minds of angry youth.â€ These same damaged youth are ripe to accept that thereâ€™s an easy â€œface you blame for failureâ€ to rectify their own shortcomings. The ego of the South continues to carry the bruise of loss to the Union, and the sting of the Civil Warâ€™s outcome coupled with an inferiority complex in regard to the Northern states is massaged by being â€œcompelled, but not defeated.â€ In an uncharacteristic act of reluctant self reflection on behalf of our lawmakers, the residents of SC witnessed the long overdue removal of the Confederate flag from the SC statehouse grounds in the aftermath of the racist tragedy.

Musically, the album solidifies the Truckers mastery of styles explored throughout their discography from the soaring crunch of â€œSurrender Under Protestâ€ to the gentle, elegiac â€œSun Donâ€™t Shine.â€ A minor criticism that can be levied against the album is the pervasive somber subject matter that also includes an exploration of depression on â€œBaggageâ€ (recounting Hoodâ€™s reaction to Robin Williamsâ€™ suicide) and a dirge on the Confederate symbol â€œDarkened Flags on the Cusp of Dawn.â€ Swaggering with a Stonesy groove and Cooleyâ€™s serpentine lyrical phrasing, â€œKinky Hypocritesâ€ is the only humorous respite from the darkness on the rest of the album, and the emotional levity is a welcome diversion. â€œHypocritesâ€ lampoons those political, religious, and corporate leaders whom serve as â€œthe greatest separators of fools from their moneyâ€ and hide behind flimsy conservative values they donâ€™t make much effort to uphold. The lofty ideals candidates and public officials tout crumble when their salacious private lives are inevitably exposed. In addition to Donald Trumpâ€™s most recent locker room talk, we can easily extend the trackâ€™s targets to Anthony Weiner, Roger Ailes, Josh Duggar, Larry Craig, and countless others.

I would be remiss if I didnâ€™t acknowledge the solid playing by the other Truckers on American Band. Newest editions Matt Patton and Jay Gonzalez hold down the rumbling bass and third guitar / organ / piano respectively and add new nuances to the bandâ€™s sound. Brad â€œEZBâ€ Morgan anchors every song with dependable drumming and doesnâ€™t let the pervasive melancholy drag down the momentum of the album.

The true centerpiece of American Band is the Hood-penned â€œWhat it Means.â€ Hood recounts multiple nationally divisive events over the past few years and tellingly doesnâ€™t have a definitive solution to the issues they have brought to the forefront. The track makes its case not with vitriolic hard-core bellowing but with plainspoken recitation over a shuffling acoustic thrum. The delivery is intentional so that every word is heard clearly; the cumulative outrages and tragedies outlined throughout the album tempered by an anger that has become clear headed from the exhaustion of repetitive occurence.

The Truckers have become adept over 11 albums at exploring the Us vs. Them mentality of Southern Americans that is a distinct feature of our regional mindset. American Bandâ€™s â€œEver Southâ€ argues that mentality can be extrapolated to our national personality since arriving immigrants have brought a sense of pride for their respective homeland and culture that has clashed with the attitudes of â€œnativeâ€ Americans. In regard to our current national political climate, Trump has resonated so well with working-class white Americans because of a sense of disenfranchisement as technology shrinks the oceans between nations and the melting pot of our country becomes more diverse. Trump has promised to return America to a time when it was â€œgreat,â€ before diversification forced us to contend with other cultures that dilute whatever 1950s-era Caucasian fantasy his supporters are seeking a return to. The hilarity in this self-delusion is that America has been a continuous mÃ©lange of various ethnicities and disparate influences since its inception. The frustrating aspect of Americaâ€™s unease with its diversity is the overshadowing of the truly consistent narrative of how the wealthy and those in power abuse and manipulate the lower classes to keep them forever shackled to their current socioeconomic status.

At the heart of all the recent reactionary grassroots movements, the things we share in common get lost in oppositional rhetoric: we are all struggling to make a living and to raise our children in a safe environment with a promise to a sustainable future. This election cycle has driven the stake of division even further between factions of Americans, and there does not seem much hope that the outcome will result in graceful reconciliation. However, American Band posits some serious questions we need to ask ourselves as a country to move past this â€œnastyâ€ national mood. We truly need to take some time for self-reflection and consider how our recent political climate and our collective reactions to it will shape the coming years. The first step, to quote Patterson Hood, is to sit down and finally ask â€œwhat it means.â€