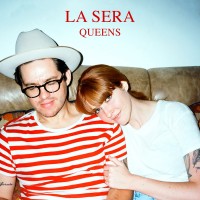 I owed John Gentile a beer for Dog Party. Forgot about the other one I owe him for La Sera. Katy Goodman's such a gem and this year, she's been part of three kickass releases: La Sera'sÂ Music for Listening Music To was one of 2016's sleeper hits in terms of indie/dream pop/power pop and Queens is an EP that finds itself Â swimming in just as familiar territory. -- rougher around the edges but worth it. The band's entire discography is a wonderful melodic trip but what I love about sifting through their catalog is you see how much more emotionally expansive they grow, lyrically and in sound. This album punctuates that notion.

"Queens" is one of the new tracks with husband, Todd Wisenbaker, and holy shit -- such a charming post-punk ride. She channels such vibrancy on the shimmery, melodic sections with Wisenbaker bringing the country heat when he sings. What makes the song is the catchy solos at the end. It's great to hear Goodman wind down after a brilliant effort covering the punks with Greta Morgan but don't get mistaken. This record motors through your emotions with such a sweet intensity. After that opener, it barrels into the other new track in "Magic In Your Eyes" -- dialed back, lower in tempo but one that finds Goodman paying homage to so many '80s influences from Debby Harry to Robert Smith to Cyndi Lauper. "Shadow Of Love (Slow Return)" caught my co-worker asking me if that was Lana Del Rey. I was too absorbed to answer because I love how this was reworked. Even moodier than the original with a greater sense of urgency. This really amplifies the track as heavier, rougher, rawer... and with a grating solo to die for. It's here where you see just why Goodman's punk as fuck. Without spoiling too much of the five tracks at hand, let me just end by saying in you love Led Zeppelin, then you're in for a "Whole Lotta Love". Goodman's voice takes that track to the moon, to the sun, to heaven and back. Their spin, their signature, their way of kicking more ass. In just 18 minutes, La Sera prove just how captivating they are. As if there was any doubt.Â

The Mahones: 25 Years of Irish Punk