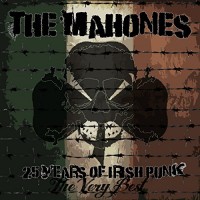 On 25 Years of Irish Punk, The Mahones attempt the difficult task of re-recording a bunch of their classic songs. They do an admirable job, and the new versions stand up just fine to the originals. In some cases they might even be superior. They didnâ€™t attempt to radically alter the songs that fans love. They were only looking to spruce them up with a fresh coat of paint. The new takes more closely resemble the energetic way the songs are performed live.

The Mahones are a Canadian Irish punk band led by Dublin born Finny McConnel. Theyâ€™ve been around since 1990 and have traveled the world many times over. Theyâ€™ve released a dozen albums and have been extremely influential in the Irish punk genre. Their music is in the same vein as bands like Flogging Molly, The Real McKenzies and The Tossers. Finny has a raspy voice reminiscent of Lemmy or Frankie Stubbs from Leatherface. They wear their musical influences on their sleeve, and you can definitely hear the impact of The Pogues, The Clash and Stiff Little Fingers.

Like many Irish punk bands, a good portion of The Mahonesâ€™ songs are about drinking. You could easily use 25 Years of Irish Punk as a drinking game, and take a sip every time Finny says The Pogues, The Clash, Shane MacGowan, Joe Strummer or Irish punk. You'd be drunk after the second track, and dead by the end of the album.

The Mahonesâ€™ best known song, â€œA Great Night on the Lashâ€, is here in all its re-recorded glory. Itâ€™s about drinking with Shane MacGowan (a legendary drunk) for three straight days, and contains the bandâ€™s signature line â€œA great night on the lash/Kiss my Irish assâ€. (â€œThe Queen and Tequilaâ€ also name drops MacGowan.) â€œPaint the Town Redâ€, â€œShakespeare Roadâ€, â€œA Drunken Night in Dublinâ€,â€Streets of New Yorkâ€ and â€œAcross the U.S.A.â€ are all about drinking and revelry. â€œGhost of a Whisky Devilâ€, â€œDown the Boozerâ€, â€œIs This Bar Open â€˜Til Tomorrowâ€ and â€œDrunken Lazy Bastardâ€ (a fan favorite) are also drinking songs, but are a bit more contemplative. Most are are delivered with a wink and a nod, and are clearly in the spirit of fun.

25 Years of Irish Punk has more fan favorites like â€œGive It All Ya Gotâ€, â€œOne Last Shotâ€ and â€œAngels & Devilsâ€. It also has a couple of newer songs that seem destined to become Mahonesâ€™ classics. â€œThe Hunger & The Fightâ€ and â€œPunk Rock Saved My Lifeâ€ both stack up well against the older stuff. Thereâ€™s a handful of covers too. The Mahonesâ€™ Irish roots are on display with Stiff Little Fingersâ€™ â€œAlternative Ulsterâ€ and The Undertonesâ€™ â€œTeenage Kicksâ€. â€œLast One To Dieâ€ from the Rancid tribute album Hooligans United is also here, as well as a live version of the traditional â€œWild Roverâ€.

25 Years of Irish Punk can serve several purposes. It would be a fine introduction for anyone looking to get into the band. Itâ€™s also a greatest hits of sorts (though some grumpy old timers would likely prefer the original versions of the classic songs). Additionally, it collects some odds and ends that would otherwise require purchasing multiple albums. At 75 minutes long, it definitely gives you a good bang for your buck. Most importantly, itâ€™s a fun listen front to back. Most Irish punk fans are probably already aware of the Mahones. If not, this would be a great place to start.