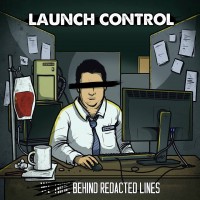 Propelled by a power-of-the-people theme coupled with a bit of fear and uncertainty, Reading, UK act Launch Control have put together and outstanding six-song EP in their newest release, Behind Redacted Lines.

Launch Controlâ€™s sound is hard for me to define although the lead track, the fast and furious â€œCloak and Dagger Pt2â€ could come directly from Propagandhiâ€™s first post-John K. Samson album â€œTodayâ€™s Empires, Tomorrowâ€™s Ashes.â€ It is loaded with head-swivelling alternating vocals and a super-charged energy that will excite even the deadest of hearts.

But where the lead track is full-on punk, follow-up track â€œThe Perfect Murderâ€ quickly settles you in to what I believe to be Launch Controlâ€™s true sound: intricately composed music with sudden and unexpected changes, combining a bit of hard rock with moments of pounding high-tempo sections. â€œFalse Witnessâ€ follows suit with mid-tempo beats underscoring a song that builds to a strong crescendo at the end.

â€œMoving Targetsâ€ swerves a bit more towards the punk side of things with an angry energy, and is likely the best track on the album. The final track, â€œA Highly Classified Lieâ€ (which contains a line that the EP gets its name from) takes the listener along on a rollercoaster song that strains to reaffirm oneâ€™s importance in the face of everything thrown at them, from general classification to straight-up marginalization. If â€œMoving Targetsâ€ is the song that convinces the listener that each person is an individual voice to be heard , â€œA Highlyâ€¦â€ serves as the follow-up to keep reminding us that although we all have the strength to stand and be counted as individuals, our collective voice can be even more powerful. The two final songs create a one-two punch that few bands can accomplish and are worth the price of admission all on their own.

While this is a relatively short EP, there is a lot too it, and it mostly sounds pretty good. Of particular note is lead vocalist Lee Switzerâ€™s unique voice. Deceivingly meek at times, there is a lilt to his inflections that add just enough drama to the already well-constructed lyrics without going overboard into melodramatic territory. Couple that with backing vocals that are always in the right place and at the right time, and it all comes together tightly.

As mentioned previously, the music is excellent and goes well-beyond generic punk in both style and composition. There are multiple guitar parts at points that likely arenâ€™t possible when played live due there being a single guitarist (and this is always a bit of a pet peeve for me), but is forgivable here because the band is clearly putting together something akin to a mini-opera (once again, these songs are dramatic!).

However, Iâ€™d be remiss if I didnâ€™t mention my (minor) two points of concern. The fourth track, â€œ(Dying Echo)â€ is a somber bit of deep and quiet spoken lyrics overlaid with a dark and droning melancholy dirge of techno music. I feel it would make an excellent interlude about two-thirds of the way through on a full-length album, but cutting into the near-middle of five songs on an EP it seemed a bit out of place. Editorially it just didnâ€™t work for me on a shorter album such as this.

Additionally, while all of the instruments are played with skill and panache, the actual sound of the percussion, specifically the kick and the snare, sound too over-produced and electronic. Not a drum machine, as such, but more like they were played on an electric drum set (which may actually be the case?). Either way, at certain points of more frenetic drumming, each strike sounded the same as the previous with no subtle variation. This is in no way a deal-breaker and, to be honest, it isnâ€™t noticeable most of the time, but there were a few points when it was discernible enough to draw me out of my revelry.

Overall, and despite those minor niggles, this is a damn good album. I cannot stress how well-composed everything is, and the unusual quality of Switzerâ€™s vocals puts it a step above. Not only is the â€œBehind Redacted Linesâ€ a worthy addition to anyoneâ€™s library, but it hints of more exciting things to come from Launch Control.