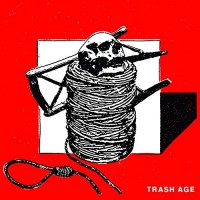 Before The Holy Messâ€™s unfortunate break up in July of this year they graced us with one more release in April. Though it clearly isnâ€™t one last full-length, Trash Age contains their last three new songs that fans can absolutely get into.

The A-side consists of the title track and â€œFlesh Of The Fresh Blood Of The Dove.â€ â€œTrash Ageâ€ starts out with this long synthesizer drone and then the band jumps right in with fuzzy guitars and their signature gravely singing. This is also a song that, more than anything shows off their knack for vocal arrangements that have great harmonies, but still remaining sounding very aggressive. â€œFlesh Of The Fresh Blood Of The Doveâ€ is much more vocally angry (believe it or not) and instrumentally thrashier. With sort of a more heavy metal-based guitar riff that acts as the basis of the song between verses, it also makes for the rhythm to be very choppy.

The B-side song titled â€œCaught Like Thisâ€ is a more straightforward melodic punk song compared to the other two. Once again the Mess showcase their vocal talents only this time, the two vocalists switch off about every other line the way you might hear a band like The Lawrence Arms arranged their vocals. This track also quiets down towards the middle until one brief pause and the they jack up the volume to blast through the chorus one last time.

For those of us that followed The Holy Messâ€™s career since they made it on to the â€˜Org or even before when they formed in 2006, I think you will find Trash Age to be a solid follow up to Comfort In The Discord and last addition to the bandâ€™s discography that you will most definitely appreciate.

500 copies of this 7-inch were pressed on white vinyl.

Testament: Brotherhood of the Snake