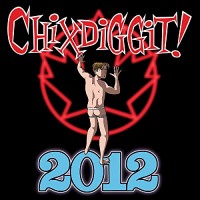 Chixdiggit albums tend to be few and far between so, for a fan like myself who has been listening to them since '96, it is always good news when a new one is finally announced. When the band reached the 25-year mark and we learned that they would be putting out a near-25 minute single track album chronicling their tours and gigs from 2012, aptly-titled 2012, I was cautiously optimistic. Long-play songs, especially when exploring a theme or concept, can be very hit or miss. But Chixdiggit has always been three things above all others: catchy music, funny, and curiously clever with their lyrics.

I'd like to report back that the album, mostly, does a good job. But the mileage (kilometerage?) for the end listener is really going to be based on whether or not you are a pre-existing fan, or if you buy into what Chixdiggit is selling. The single track is essentially twenty-one sections highlighting either a significant portion of one of their tours (getting there, getting back, day off) or each city they played in that year (including the cancelled date in Victoria at the end).

A majority of the album is comprised of what could rationally be considered Chixdiggit's style. KJ's unique voice, his care-be-damned intention to fit as many syllables into a single single verse as he needs, and the (increasing) use of back up vocals are all here; coupled with mid to high tempo beats and catchy pop-punk. Other parts venture into territory that Chixdiggit has visited, but rarely, with guitar rock, low tempo beats, and other various styles not normally associated with the band (the Stuttgart section is likely the funniest due to how far from left field it comes from).

But what makes this album enjoyable as a concept- one year of touring- is also its Achilles heel. With only one solid break in music, most sections end and begin to fade before the next starts up, which brings up my two major criticisms of this album.

The first is that there is a very little callback to previous rhythms and sections. What you are getting here literally is twenty-one mini-songs, mostly different. The band attempts to delineate sections by alternating tempos, but you never really get the feel that this is a unified song, as much as it is a bunch of short songs tied together solely by theme instead of composition.

And that leads to the second criticism, which is the transition between sections. A little over half of the time it really just didn't work. This majority of transitions often seemed too forced (especially when the band delves into a style which is unusual to hear from them), or didn't so much indicate a new section as to take the listener out of the spell which they are trying to produce with a super-long track.

To that end, in my opinion it would've been preferable if Chixdiggit had simply decided to break this up into individual tracks, regardless how short, in lieu of trying to blend them together. This isn't entirely a deal-breaker, but touting this as a single punk song is a bit disingenuous. The effect would be about the same if you took their album From Scene to Shining Scene and faded the songs together into a single track. I think the only time this works out is if they play it all front to back live.

In the end, this is a very fun album. The humor of a tour diary through the Chixdiggit lens makes it better than most tour songs. The pop-punk is poppy and punk, as expected, and one could find worse ways to spend a little under 25 minutes. It seems much more geared towards existing fans than the uninitiated, but there is enough here for everyone to like. From a non-fan perspective I would give this three out of five stars. For fans I would give it four. So how about I split the difference?

I'm Glad It's You: The Things I Never Say