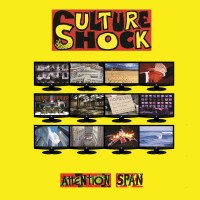 The curse of Culture Shock is that the bandâ€™s virtues are the very things that kept them in the shadow of their brother bands, Subhumans and Citizen Fish. Subhumans forged the modern anarcho-punk identity through a series of hard smashing three chord bangers along with some tactically placed sonic experiments. Meanwhile, Citizen Fish helped established third wave ska with its persistent upstrokes and further proved that ska-punk didnâ€™t have to be mindless. Yet, while both of those bands are fairly easy to tag (in part because they both helped created the very thing to which they are tagged) Culture Shock is a bit of a squirmier animal.

Dick Lucas formed Culture Shock in the wake of Subhumans original break up and going off Culture Shockâ€™s first few records, it was clear that while Lucas was holding true to a political identity, he was interested in growing out from the stylings of pure anarcho-punk. Thus, Culture Shock was a born, a sorta-anarcho, sorta-ska, sorta-reggae, sorta-experimental band that was equally as wont to kick out crushing riffs as it was groovy reggae as it was snappy skaâ€¦ hell, they even did a take of UK/Adrian Sherwood style dub with â€œAll [Messed Up] Together.â€ It was a bold move that worked. The band was essentially free to do whatever they wanted without feeling like they were â€œtrying to doâ€ anything. This not only resulted in unique, unquantifiable musical switches, but it allowed Lucas to tackle direct, on-the-nose lyrics like â€œNorthern Irelandâ€ as well as more ambiguous thoughts like â€œPressure.â€

So, without such a concrete identity, Culture Shock seemed to fade away, being replaced by its more definable son, Citizen Fish, and to a degree, languish without being appreciated for its eccentricities.

Thatâ€™s what makes it such a surprise that almost out of nowhere, Culture Shock suddenly appeared in 2015- particularly considering the fact that both Subhumans and Citizen Fish were active units. And now they release their first album in almost 30 years, Attention Span.

Always interested in being timely, the album centers itself around contemporary issues as it does timeless ones, as you can tell by the title and cover. Perhaps in recent days, many punk bands have chosen to attack vague, large ideas rather than take sniper shots. Lucas, who is as much a poet as he is a singer, goes for the specific. Opening track â€œVisibilityâ€ lashes out at the modern big brother culture. Lucas comments on the tragedy that we have willingly given up any semblance of privacy we once have. He then further argues that the images being projected by these voyeuristic services arenâ€™t even really descriptive of real life. The fact that these observations are coming from a first generation punker that was warning the rise of these horrors forty years ago not only underscores the import of his words, but also makes a fine argument for his own insight.

This theme continues through the album. While â€œVisibilityâ€ is about citizens giving up their privacy, â€œWhat have we got to hideâ€ looks at the issue from the other angle, focusing on government surveillance. In great anarcho style, Lucas goes on to argue that these tactics are being used to make people fearful and weak, which is a form of government control. Maybe you used to be able to argue that position was a little too conspiracy-theoryâ€¦ well, look at this yearâ€™s presidential candidates and Lucasâ€™ ideas donâ€™t seem nearly as far fetched.

Music like this often does require a harder edge, and perhaps moreso than on their early records, Culture Shock do pay tribute to their relations. Guitarist Alex Gordon really snaps against those strings, leaning towards that famed Subhumans smashing. Listen to him rip it up on â€œMindwashâ€ on lean towards a lurching guitar clank on â€œDoesnâ€™t Work For Me.â€ Meanwhile, bassist Jasper Patterson and drummer Bill take the fundamental rhythm of Citizen Fish and ride that ska-reggae groove with both a love of the genre and a certain English energy. â€œSomeone Has To Payâ€ shows how both of these gentleman fundamentally understand the genre from which ska-reggae/punk was born like few Europeans can. Despite the serious message here, the band is having fun and it pays off.

Yet, the bandâ€™s attachment to their landmarks also serves as an important link. Because there are sections where they unabashedly embrace genre, theyâ€™re free to wander off down unknown corridors without fear of getting lost. The aforementioned â€œSomeone has to Payâ€ interjects a hard, cold post-punk clang into the bouncy reggae and gives the music a surprisingly threatening edge. â€œStart at the Backâ€ starts with an almost Sabbath style riff before collapsing into a discordant ska-beat, which, with its noisey-face, bends against the normally harmonious genre. â€œThings to Doâ€ is one of the funkiest, and best, cuts on the album. It embrace the spaciness of dub while Gordonâ€™s wire-guitar lines slice through the floating, thick mÃ©lange.

The difficulty with Culture Shock used to be that if someone asked you to describe them, youâ€™d be like, â€œWellâ€¦ umâ€¦ there kinda likeâ€¦ well, noâ€¦ not thatâ€¦ sorta theyâ€™reâ€¦ well, not so muchâ€¦â€ Now, the band proudly wears their parent and children bands proudly. But, even with those influences, there is no muting what Culture Shock is, and by virtue of their acceptance of the traditional, their weirder, and most interesting, aspects shine brighter than ever, despite the fact that this is the first time theyâ€™ve been brought out in about 3 decades.