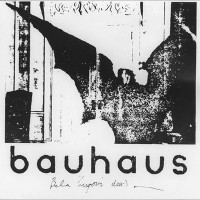 Bela Lugosiâ€™s Dead is the first single from the legendary UK Gothic/Post-Punk band Bauhaus. First released in 1979, this one track paved the way for the band and became legendary in the Gothic Rock community. Itâ€™s pretty much the proto-tune for an entire scene and Bauhaus is often considered the first band to bring the dark and gloomy style to the forefront arguably. Of course you canâ€™t discount other notable acts like Joy Division and Siouxsie and the Banshees for example in similarities, but the dark overtones and stylistic choices the band presented here helped establish the overall look and feel.

Whatâ€™s funny in hindsight is lead singer Peter Murphy saying about the track, â€œThe song was written to be tongue-in-cheek, but since the group performed it with "naive seriousness", that is how the audience understood it.â€

The track is a long burner, clocking in over nine minutes, but itâ€™s a journey into the void and has this very scary vibe to it filling up a room with dreary atmosphere. The drumming pitter patters like drops of water in an underground cave, the guitars screech as if old doors were opening, bass rumbles like the beating of a heart in panic, and of course the swell of noise builds up to the epic climax of Murphy crying repeatedly, â€œBEEEELLLLA, BEEEELLLLA, BEEEELLLLA!â€

This should have been the theme song for the Castlevania series!

Lyrically the song is cinematic in its descriptions with lines such as, â€œThe bats have left the bell tower/The victims have been bled/Red velvet lines the black box.â€ You can almost picture an old grainy black and white film playing in the corner of a darkened club with many goths standing around smoking and trying to dance like Ian Curtis. The dead fly dance mind you!

The track was always a live spectacle and probably the most well-known attempt was played at Coachella 2005 when Murphy hung upside down for the entire duration singing and swinging his arms like a freakinâ€™ vampire. Yeah, thatâ€™s pretty punk Iâ€™d say.

Two other tracks accompany the single. Side-B has a rare cut titled â€œBoysâ€ and it sounds almost Glam-Rock. Sorta T-rex crossed with Bowie. The third track was untitled at the time and played in short demo form, but eventually became their next single â€œDark Entriesâ€, a precursor to their excellent debut album, In the Flat Field.

So youâ€™ve probably heard the name, seen the bands industrial face logo, or perhaps a patch on someoneâ€™s jacket, but nowâ€™s your chance to actually give them a listen. Start here and then explore on if your dark desires call to you. Dig itâ€¦

You Blew It!: Abendrot