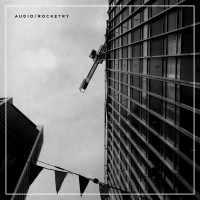 It is easy for many of us to recoil at the genre tag line of â€œfolk punkâ€. The vision of which brings gasping buttons on beer soaked flannels, trendy punk fans waving around Neil Youngâ€™s Harvest record, and bad harmonica solos to the forefront of our minds. Fortunately for us all, Edmontonâ€™s Audio/Rocketry are the real deal. They are the folk/punk/country/rock and roll band that successfully manage to combine the best parts of these genres without sounding pretentious or forced.

Audio/Rocketry are a great band from Canada, that you probably arenâ€™t listening to. They have put out some strong releases over the course of their existence, but their most recent self titled release seems to be the shining jewel on their folk-punk crown.

The record was recorded at Rain City Recorders in Vancouver, and the production value shines through. The drums are poppy and slick, and the vocals and harmonies are appealing, and full of catchy hooks.Â Audio/Rocketry play some slow and thoughtful songs that creep towards the mainstream, such as â€œRibbons of the Highwaysâ€ that bring to mind bands like Ontarioâ€™s Attack in Black and City and Colour. They offset the slow and sad songs with up tempo, punk beat driven songs like â€œFault Lineâ€ and â€œParking Lotsâ€. This contrast in the track listing makes for a good listen. Whether you are sad, stoked or somewhere in between, this record has songs to match your mood.

Audio/Rocketry display musical proficiency with solid drums and impressive solos (both guitar and banjo), as well as creating well written songs that will appeal to both the punk rock crowd as well as some more indie leaning fans. Give this record a listen, you wonâ€™t regret it.Â

Puke Fest: Hold Our Hair Back