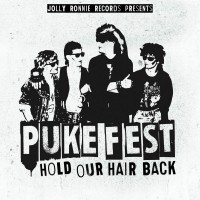 The story of Puke Fest is a bit skeptical, but I'm going to look beyond their history and take their long-awaited debut album for what it is; a great record.

Their story claims they were a short-lived band that formed in Carollton, Texas in 1981. During that time, band members Ian Truly (vocals, guitar), Nigel Gordon (guitar) and brothers, John Smythe (bass) and Paul Smythe (drums) recorded their debut album "Hold Our Hair Back". Shortly after they completed the record, Nigel's father, completely disgusted by the music his son was making, took the master tape and lit it on fire. The band was so discouraged that they called it quits. Â Â


Fast forward to 2015. While cleaning their parents' basement, John and Paul discovered that there was indeed a second tape. TheyÂ immediatelyÂ notified the rest of the band with the good news. So what we have now is a 35 year old punk rock album filled with out-dated references and someÂ strangelyÂ prophetic titles like 'World Wide Web'.

Clocking in a just over a minute, the album kicks off with Â "I Don't Hate School (It's Just The Principal of the Thing)". With lyrics like "You can't kick me out for being alive. You can't kick me out because I'm Jesus Christ", you can get an idea of where this album is headed. Â The song "Is Your Daughter Home?" is the slowest track on the record, it's an ode to the days of calling your girlfriend's house and having to speak with her father first. Â Following that is the catchiest song on the record, a power-pop track titled "Betamaximum Sentence" which describes the trouble of not being up to date on the latest technology. Â The very quick, "No Smokes Today" sounds like what Teenage Bottlerocket would have sounded like 30 years ago.

Whether you believe the story or not, this album is a total party. Fans of the Buzzcocks, Dead Milkmen and old school pop punk will certainly enjoy the ridiculousness of "Hold Our Hair Back".Â