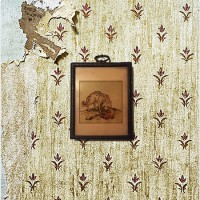 David Donderoâ€™s With Love is essentially a set of early recordings for his full length 2013 album, This Guitar, that he recorded in 2012 with Laura Jane Grace of Against Me! Press releases describe the album as being â€œrecorded byâ€ Grace, and seem to be specifically trying to avoid the word â€œproducerâ€ when referring to her role. Itâ€™s probably because the album was recorded much more casually than that, and came about simply when Dondero visited Graceâ€™s then-new studio and was simply offered the opportunity to record a few tracks right then and there to try out the studio. There doesnâ€™t seem to even have been a plan to release the tracks at the time they were recorded, which makes it an even more intimate album.

Just a few weeks ago I had the privilege of reviewing the new Connor Oberst album for this site, and I canâ€™t help but hear the similarities between Oberstâ€™s Ruminations and Donderoâ€™s With Love. Besides the fact that Dondero has a similar songwriting and singing style to Connor Oberst, With Love is even more stripped down and personal than Ruminations, as itâ€™s just Dondero alone with an acoustic guitar.

The albumâ€™s delicate beauty shines through in â€œTake a Left Turn in Boiseâ€ and â€œRoses and Rain.â€ â€œAlcoholâ€ is a bit of a strange song that meanders lyrically and has an awkward lyrical rhythm. But the real highlight of the album is the closer, â€œSamanthaâ€™s Got a Bag of Coal,â€ which can best be described as a leftist political Christmas song. The song tells the story of a trans woman named Samantha who dresses up as Santa Claus to give out coal to all of the evil people in the world, including overzealous cops, CEOs, and bankers. I love unusual Christmas songs, especially punk and rock Christmas songs, and the With Love version of â€œSamanthaâ€™s Got a Bag of Coalâ€ has an almost folk-punk quality to it. Iâ€™d give this one song a five-star rating on its own if I was reviewing it as a single song. Itâ€™s wonderful.

With Love is one of the most delicate and intimate releases of 2016, and the songs are surprisingly even stronger as acoustic demos than they are in their finalized versions on This Guitar.