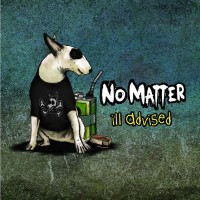 If you took the world's most powerful super computer and fed it every album in the entire history of pop punk, and then told it to pick the best parts and compile them into a single album, you wouldn't get No Matter's new LP Ill Advised.

But it would be pretty damn close.

It is hard for me to describe how this album makes me feel, so I am going to tell you a story: in the fall of 1991 a bunch of bands from the Chicago-land area put on gig in a theater and named it Loolapaloozer. Screeching Weasel was the final, headlining act. Now, I'm not sure if this was an official record release party, but they were selling their brand new album My Brain Hurts, and this was the first time I heard any of these new songs from it. I was astounded. I was in heaven. These songs were a different direction for Screeching Weasel, and I was swept along with them. To this day I believe that My Brain Hurts is not only THE defining album of pop punk, but also the best pop punk album ever.

I like pop punk. A lot. It is probably my biggest go-to genre. But I don't really get into a lot of pop punk music because most of it always the same. Rote, derivative, I'll give it a listen but it is quickly forgotten in a field of the same thing. Occasionally you need fresh blood to come in and, even though they are mostly rehashing what has come before, the differences are enough to make it all seem fresh again. These are your Teenage Bottlerockets, Masked Intruders, The Murderburgers(es?). I think that No Matter has accomplished this same feat, and more.

Let's start with the vocals. The front three each get lead vocal duties at some point and, to be honest, any band would be lucky to have just one of them, but No Matter comes with a trio. The definite lead is guitarist/vocalist Dan, who gets the lion's share of songs. You know how I said there is a trio before? Well actually you get four voices. Depending on the song, Dan either uses a slightly geeky singing voice in the vein of Nerfherder that can often slip off-key during transitions ("Migraine," "Broken Compass"). It is precocious enough when this happens without getting annoying at any point. At other times he'll employ a more traditional punk-sounding voice ("Tinnitus," "Retch") that adds a bit more oomph without being too angry. At points he will also mix the two, which is a treat.

The other guitarist, Jarlath, picks up lead vocals on the tracks "El Bait," and "King K-Hole." His voice is definitely in line with a more traditional punk sound, scratchy and aggressive, a counter to Dan's milder vocals. Finally, bassist Cat rounds out the album on three tracks- "Godwin's Law," "Lurgy," and "Orange Juice & Toothpaste." Lest one expect she brings a gentler feminine voice, note that these three songs are some of the fastest and/or hardest of the bunch, and she lays down her vocals with unmatched authority.

Of course, with this being pop punk, when you have three accomplished vocalists each bringing unique sounds you absolutely have to have great backing vocals. Thankfully No Matter is just as good in this respect. When not doing leads, the other two will fill in with backing vocals that are well-placed and perfectly-timed for maximum effect. The volume of these backing vocals is also perfectly produced. They are loud when called for, or subtly tucked into the background when need be.

Musically, everything is nearly perfect. On the stringed instruments there aren't a lot of blazing solos, but the two guitarists stick with what they are confident with so, instead, you get quite a few catchy riffs as one goes off on a tangent for a moment or two. Cat's bass is solid through and through.

One member I haven't mentioned yet is Jamie on drums. For me, pop punk lives and dies by the percussion, a fast tempo interrupted (often, hopefully) with ultra-quick snare rolls and plenty of fills. Jamie does all of this with speed and precision, never missing a beat. If the vocals, guitars, and bass are the body parts of this awesome Frankenstein's monster, then his drumming is the lightning that gives it life.

Front to back this album is a powerhouse of energy and excitement. If the lead track, "Migraine," jump-starts the album, the final track, "Stuck in a Spot," brings us around to an earlier, more rock type of punk. This song will make you sway and hop more that jump with energy. The sudden guitar solo comes in a bit too loud, which I believe is completely intentional (because this whole album is produced so well, I cannot believe it is a mistake), connecting the listener to a more garage-style pop punk of the past.

So, if Ill Advised is so great, why give it 4.5 out of 5 stars? Well, there are some extremely minor cracks, but I wouldn't be honest (and this wouldn't be a twdc review) if I didn't point them out.

Superchunk once sang that "nothing's new, everything's borrowed, everything's used." I can't entirely agree with that, but that there are points on this album that gave me minor flashbacks to other songs by other artists. The most noticeable is the composition and flow of the verses in "El Bait," which sound a lot like the Teen Idols' song "When I Hear Your Name." I don't think for a second that No Matter has intentionally lifted this, but it has been done before and it is almost unmistakable once you recognize it.

Also, this album is loud, powerful, and solid (just how I like it), but there are points where the kick drum and the bass come together a bit too much, creating a brief wall which nearly drowns out all else. Straight Outta Junior High had this problem throughout the entirety of Kiss of Deaf, but it is not nearly so bad here. If the entire album suffered from this, a whole star would get knocked off. Luckily, these instances are few and far between.

That being said, I simply cannot recommend this album more. In the month that I have had a preview copy of it I have listened to this album more than fifty times and IT IS STILL AWESOME. From the catchy choruses ("King K-Holeâ" is going to be a huge crowd participation song), the solid and strong delivery, to the so-perfect-maybe-a-machine-did-write-these-songs composition; this album will be a pleasure for anyone to listen to multiple times and is an instant staple for fans of pop punk the world over.

It is, without a doubt, my favorite pop punk album of the last twenty-five years. To be honest, My Brain Hurts had better watch out. Because No Matter's Ill Advised just keeps growing on me.