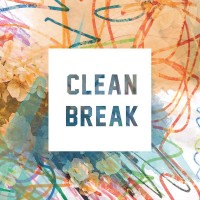 Though it contained only six tracks and fell short of the ten-minute mark by almost two whole minutes, Clean Break's 2014 EP, Face Value, was in my top five hardcore releases of that year. Sure, you could call it by-the-numbers youth crew, but even the simplest musical styles can be elevated beyond the sum of their parts if the execution is good enough. And this Faro, Portugal group executes with precision. Fast, punchy, and energetic, Clean Break excels at no-frills hardcore in the vein of 90's greats In My Eyes and Hands Tied. And thankfully, both Face Value and the band's 2013 demo were buoyed by a clean, tight production quality not often heard in a youth crew release. Clean Break doesn't reinvent the wheel, but - much like Massachusetts youth crew revivalists Mindset - they perfect rolling it to a science.

The band's newest release for the always top-notch Straight and Alert Records is a self-titled EP that brings fans of the Rev tradition more of the same as Face Value. Make no mistake, when it comes to traditional hardcore, not branching out is a positive thing. Simplicity is the name of the game and if a band can move listeners within a very simple framework, then there's something special about them.

Suffice to say, Clean Break knocks it out of the proverbial park once again: five brand new doses of stage dive fuel for the positive-minded. Clear vocals, fist-pumping sing-a-longs, and chugging breaks that will make even the most jaded ex-hardcore enthusiast jackknife into the crowd like a maniac. These new jams are unrelenting in their speed and intensity, but the overall feeling is not one of misplaced anger - an attitude that dominates and detracts from most modern hardcore - but instead a confidence that things can get better if we're all willing to try. And if you think that sounds naÃ¯ve, check yourself for a pulse. If ever there was a time when we needed some good vibrations, it's 2016.