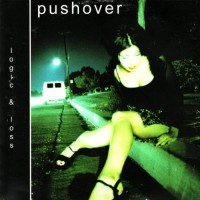 Pushover was a band that mixed elements of pop punk, power pop, indie rock, emo, and ska together from the late 90's to early 2000's. The band featured ex-members of the highly influential ska band, Mealticket. In 1998 they released their first album through Asian Man Records, and followed it up two years later with Logic and Loss. Judging by the artwork alone, one might think that this would be an incredibly emotional gem, hidden in the back of a successful record label's catalog. It's not anywhere close, but Logic and Loss is a decent listen for fans of bands who have multiple styles going on. Putting a genre on Pushover would be nearly impossible. They're not spunky enough to be pop punk. Their brand of ska isn't exactly predictable ska. There's nothing "cool" about their sound, and that's probably why they are often forgotten. They were a more mature sounding version of the genres they were categorized in. Vocalist Ricky Estrada has a higher pitched voice, and he occasionally sings slightly out of tune. His voice doesn't blow my mind, but he's capable of producing some good melodies. Backup vocalist David Ferreria provides some appropriate backups, but sometimes better harmonies are needed in the bleaker moments. I often wonder if the record would have been better if the band had a screamo singer stepping in every once in awhile. The lyrics aren't very good at all, and could be a lot more personal. It seems like a lot of them were thrown together without a care, and not much thought went into them. Drummer Dennis Leipert is definitely a highlight on the album, as he's always bringing the energy. Ricky lays down some of my favorite guitar solos of all time, and they always seem to match perfectly with the song. David is a fantastic bass player, and definitely brings some of the songs to a higher level. Jim Cushnie is on the tenor sax, and compliments trombone player, Richard Ferreria nicely. There's not a ton of horns going on, but when there is, they could definitely be better.

The albums starts with "Tell Me Why." It's a perfect way to start things off, and it's one of the best tracks on the album. "Will I" follows, and it's another one of the best songs on the album. It's catchy, and features one of my favorite guitar solos of all time. The lyrics get a bit more personal, and benefit greatly. It reminds me of something that would be on Something to Write Home About by The Get Up Kids. "Logic and Loss" is an interesting track that I always felt could have been a bit better. There's something about the chorus melody that's a bit off to me. The songs has an amazing instrumental breakdown, and the verses are amazing. The lyrics seem to be about the election, and speak true to this day. Another one of the best songs, but like the other two, it's still not amazing. It's missing something. "Go Boy" is the first hint of ska, and it's definitely the most ska based song on the album. It's groovy, it has some great bass lines, and the lyrics are about hating a person, which is always nice. The chorus seems a bit uninspired, and repeats too many times. One of the best things about this track is the guitar solo. "Devil On My Shoulder" starts off intrestingly, but it ends up being a decent tune. The verses are pretty awful, but the song has a decent chorus. The guitar solo is great, and the song ends perfectly. "Till Tomorrow" might be the best song on the album. The verses aren't very good, but the chorus shows some signs of pure emotion, but again, it's missing something. The lyrics don't match with the intensity, and it suffers. The song does feature a really amazing instrumental breakdown towards the middle of the song. It's the best moment on the album. "Hooray" has a really reflective start, and it really shows a different side to the band. The chorus is pretty predictable and bland, but it's verses make it decent. "Untitled#" has nothing special about it. "Radio My Life" starts with some cool horn lines, and goes into a surprisingly catchy verse. Everything else in the song isn't very good, though. "Her" has a nice chorus, but the lyrics aren't personal enough. It has the potential to be something, but it falls short. "Down" has some awesome drum work, but the only great thing about it is the line, "Sometimes I want to be someone else. Sometimes I want to be no one else." It's sung in a hopeless, but catchy way, and it's one of the best moments on the album. "Little Faith" is more of the same. It has an interesting horn line, and it's put together a bit better than most of the songs on here. It's an enjoyable tune, but nothing amazing. "Home" ends it off, and it's a slow, relaxing, and long song. It's definitely one of the better songs on the album, although it does drag on a bit too long. Whenever I can't sleep, I often find myself singing the first line of the song. It's a good closer, and one that I can enjoy in certain situations.

Overall, Logic and Loss isn't a very good album, but it's worth listening to, at least once. None of the songs are amazing, but there are moments that might surprise some people. This band was just having a good time making music, and if they stuck around a little longer, they could have figured it all out. There's a ton of potential, but it never seems to add up.Â Despite a painfully average album, there's something likeable about Pushover. Maybe they should get back together and give it one more shot.