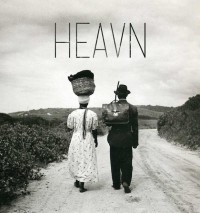 If there's one thing that Joe Strummer taught us, it's that punks have a responsibility to seek out and listen to music from people of color and pay attention to what they have to say. I believe the legacy of the Clash is for us to remember that that's an important part of punkâ€™s anti-racist agenda. And in that spirit, I bring you my review of Heavn the phenomenal debut from R&B/hip-hop singer, Jamila Woods.

If Jamila Woods is a familiar name to you, either you follow slam poetry pretty closely, or else you know her from her guest appearance on Macklemoreâ€™s â€œWhite Privilege II.â€ Taking the starring role on her own album for the first time, Woods has created a vast, sprawling, complex identity piece that is both deeply personal and radically political at the same time. In a society that relies on beating down your self-esteem, especially if you're a person of color, self-love becomes a radical act, and Heavn is an album about Woods learning to love herself, not in spite of, but specifically because of her blackness. Sprinkled between the songs are interviews with other black women (or perhaps one black woman, since Iâ€™m bad at differentiating voices) about race, but also about identity in general.

If there's a resemblance between Woods's style and the style of more mainstream pop artists, it's likely not coincidental. Woods's radical message of self-acceptance, which she ties in heavily to the Black Lives Matter movement, has the slick, studio produced sound of a more mainstream artist as the sugar to make the medicine go down. And as an independent artist, she doesn't have corporate ties that undermine her political message the way someone like BeyoncÃ© does, for example. In addition to a clean, crisp mainstream sound, she borrows lyrics freely from popular artists like Third Eye Blind, Incubus, and the Cure, as well as from nursery rhymes and the Bible, and, in typical postmodern fashion, twists them into completely new meanings to support her message.

At a time when America is debating over whether black lives matter (they do), Jamila Woods is making a case that black hearts, black souls, and especially the self-esteem of black girls matter, too. Heavn is an uplifting and powerful work from an impressive artist who's just getting started.