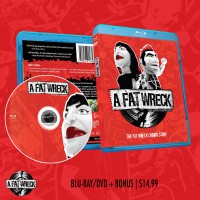 The film A Fat Wreck: The Punk-U-Mentary is perfectly described by its title. It is an in-depth look at the history of Fat Wreck Chords told through members of bands signed to the label and the co-founders Fat Mike and Erin Kelly-Burkett.Â

The story of how Fat Wreck Chords was actually created is actually a small portion of the film. Basically it was Fat Mike and Erinâ€™s joint venture to make extra money while he toured with NOFX. A Fat WreckÂ is divided into several sections that are based on what bands were signed to the label during a certain time period. The biggest focus of these time periods is the early 90â€™s where we get to hear the back stories of how now veteran bands like Lagwagon, Good Riddance, Strung Out, Face To Face and No Use For A Name were first to be signed.

What about Propagandhi you might ask? Well leave it to Propagandhi to â€œsteal the showâ€ in this film. Just like other bands, we get to hear how a band from Winnipeg managed to sign to Fat, but the film also goes into the whole â€œRock For Sustainable Capitalismâ€ kerfuffle with Fat Mike that up until now seemed like a bunch of speculation and rumors amongst the fans. As one of those fans, Iâ€™m very happy that this film sets the record straight on what happened behind the scenes.

But it isn't only 90â€™s Fat Wreck bands that this movie delves into. Once the film finishes talking about the labelâ€™s early history it branches out into its later years and we get to hear about how early fans of the label were now members of the next wave of bands getting signed to it like The Flatliners, Against Me!, Teenage Bottlerocket and Rise Against. And the documentary goes through each wave of bands until you get to the more recently signed groups like PEARS, Get Dead and Bad Cop/Bad Cop who also talk about how they were such huge fans of label and its legacy. Even musicians from bands who never were on the label like Red City Radio, A Wilhelm Scream and The Bombpops (even though they just recently announced that they signed to Fat this week) talk about how Fat influenced them.

However it does break from just interviewing band members from at certain points to go into other aspects of the label like 2004â€™s Punk Voter (and yes, Propagandhi had something to say about that, too), how producer Ryan Greene created that â€œFat Wreck Chords sound,â€ Motor Studios and how the Fat Wreck Chords staff operates at their San Francisco headquarters.

A Fat Wreck really does a phenomenal job of showing the whole picture of what Fat Wreck Chords is, what it means to people and its lasting legacy in punk rock. It shows the great familial community it has created among all of its bands and staff, but it doesnâ€™t sugar coat the more controversial parts of the labelâ€™s history either. It is a real honest look at a very important record label that is cherished by many in the punk scene. I can absolutely say that this is not another one of those generic â€œhistory of punkâ€ documentaries. It comes off as very refreshing, fun (those puppets!), fascinating and the fantastic way it was shot and uses animation keeps you engaged through out the film. It keeps a really good pace.

Whether you are a huge Fat Wreck Chords fan, just a like one or two bands on the label, or not at all, you should still see this film. All punk rock fans should see it at least once because it answers a lot of questions that a lot of us were genuinely curious about.

No Tolerance: You Walk Alone