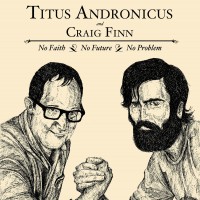 I love (legal) free downloads, I love cover versions and I love the Hold Steady. So I'm predisposed to like No Faith / No Future / No Problem, the free digital split released to promote Hold Steady frontman Craig Finn's spring tour with New Jersey indie rock lunatics Titus Andronicus. The split finds each covering one of the other's songs, the gimmick being that both songs have the same title, "No Future" - an arrangement that gave Finn significantly more choice, given Titus Andronicus' habit of reusing that title.

Titus Andronicus are up first, tackling Finn's "No Future" from his 2012 solo debut Clear Heart Full Eyes. At their best Titus Andronicus are a multi-headed beast of a band, at once spastic and cerebral. It can be hard to keep track of how many people are in the band and what the hell they're all doing. Not so here, but wild-bearded frontman Patrick Stickles' stripped down version hits all the right notes.

For me, Finn's original wasn't one of the highlights of his first album. While lyrically interesting (Finn's words are always worth listening to, and "By the way that you picked up the phone / I could tell that you weren't gonna die" is a killer opening line) it was a little one-paced, lacking the Hold Steady's spark. I'm usually a fan of his speak-sing style, but on this song his vocals never got out of first gear.Â  It almost sounded like he'd recorded a guide vocal, and forgotten to rerecord it with any emotion. The Titus Andronicus take is a little looser - Stickles doesn't do much new with the song, but his vocals impart more feeling than Finn's original, nudging the song closer to the defiant anthem that it deserved to be with lyrics like "I suppose you thought that I'd be shaken up / I suppose you thought I'd be gushing blood / Not true / I only died on the inside".

Then it's over to Finn to tackle Titus Andronicus' "No Future". For clarity, this is "No Future Part I" from The Airing Of Grievances as opposed to the four subsequent parts that emerged over the course of The Monitor and The Most Lamentable Tragedy.Â  It's interesting to hear a Titus Andronicus song shorn of all the bells and whistles (and fully three minutes shorter than the original) and, much like the previous cover, the minimal instrumentation allows the lyrics to take centre stage. â€œLifeâ€™s been a long sick game of â€˜Would You Ratherâ€™ / So now Iâ€™m going to medical school as a cadaverâ€ is probably my favourite couplet, and the â€œgood times, good times are here againâ€ outro works nicely reduced to just Finnâ€™s resigned voice.

It's a pleasant enough cover, but the song loses something outwith the context of the rest of The Airing Of Grievances. Part of the joy of the original "No Future Part I" is the way it slowly builds in contrast to the preceding rampage of "Titus Andronicus", coming in after about a minute of Stickles triumphantly yelling "your life is over" as the prior song collapses into chaos. Finn's version is fine. It's... nice. It's about as inoffensive as it should be possible to make a Titus Andronicus song.

But I shouldn't be too harsh. After all this is just a pair of covers quickly knocked outand released for free to promote a tour. If nothing else, it's reminded me to listen to Titus Andronicus more often, and sent me back to my beloved Hold Steady records which are where Finn really shines.