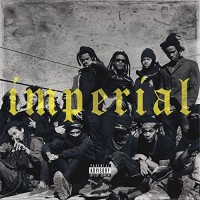 When rap albums are thrown around as contenders of the year, chances are that you'll hear Kendrick Lamar, Run The Jewels, Death Grips, Childish Gambino, A Tribe Called Quest or other big names, according to what year we're in. To Pimp A Butterfly stood head and shoulders above the rest last year, without much competition, but this year we've got a lot more options in the running. Denzel Curry is one of the lesser names leading the pack and if anything, one listen of Imperial, and you'll find yourself rummaging through any and everything that he's done so far. Infectious and jaw-dropping to say the least.

Curry's a Florida rapper who owes a lot to Odd Future for helping push his career in the early stages. After listening to Nostalgic 64 and a double EP project called 32 Zel/Planet Shrooms, you could tell that with a bit more focus he'd blow up big. He was one of the acts I was eager to see at Riot Fest Chicago because I deliberately put off listening to Imperial until I heard the songs live. He didn't disappoint at all which had me excited as fuck to dive into this LP. The opening "ULT" alone is a powerful indicator of the direction to come. Curry's one of the most passionate rappers with such a smooth flow, and what makes him even more special is how he goes about his sociopolitical commentary in America: not just tackling issues against blacks but also, the ones within the community toward each other. Trayvon Martin went to his old high school so when he spat about that incident a couple years ago, you could have heard the potential of his voice and messages. His bars alone on XXL Freshman 2016 show why he's so good and every ounce of promise is fulfilled here.

"ULT" adds that focus I mentioned but also, separates him distinctly from his contemporaries. It's more fresh, cold-blooded and full of conviction, playing off the fire of youth he packs inside. There's an ethereal melody at hand, with the keys providing a haunting backdrop to go in on, explosively and relentlessly. The way his syllables flow, so savage and so intense, never skipping a beat. The hook's one of the best I've heard in ages. It also highlights how diverse the album is: from modern trap to hardcore hip-hop to cloud rap and with a dash of Memphis rap. Three 6 Mafia's one of his biggest influences so you know what you're getting into, but what's remarkable is that he doesn't play in one musical sandbox all the time.

"Knotty Head" is another big track: more atmospheric, spacey and not as manic. It's one of those Fetty Wap-esque rhythms, whose entire complexion changes when Curry wades in about the decisions gangsters take, without taking into account who they leave behind: particularly mothers. His lyrics are pretty tongue-in-cheek as he talks about life in the projects, how playing Mortal Kombat and seeing Andy Milonakis on television got him frustrated to the point he just wanted to sell weed and earn a living due to the social pyramid that crushes the lower-class. He talks about wanting to take the easy way out but the lyrics get sillier as he goes along, especially later on when he talks about being compared to a Black Jesus. He even makes reference to Luke Skywalker's flirting with the dark side, denoting how good people find themselves doing wrong things. Abstract or not though, they really don't fit his aggressive style and more so, what's unfolding on the record -- which really need to be delivered with a sense of gravity, a strength of his after all. It says a lot when Rick Ross comes in and has the more sensible lyrics on the track, right? Shoddy lyrics aside, most of what he translates to you manages to resonate. "Zenith" is another ripper and it features Joey Badass. It throws back to the East/West Coast rivalry days and with its jazzy beat, it's a better representation of how to get loose with the lyrics but still maintain the essence of what you're trying to convey with snark.

"Sick & Tired" is another fine narrative, where he sings from two POVs - one where he's sticking up someone and the other where he's the victim. From stereotyping to drugs to guns to jail, he opens up on wholeheartedly. His words feel a bit redundant at times but these tempos and musical variations popping off really craft a novel that is highly real and deeply relatable. Imperial's biggest point of introspection and subtlety, though, comes in "Pure Enough" -- which the record needed more of. The contemplative and dialed-back nature of the song really lets his anger and anguish settle, bringing out his wordsmith qualities to the max. It showcases the cerebral core of the rapper and reminds you that even if you have to sift through some bullshit, he really is an outstanding storyteller. This track brings it all to the surface as he continues rapping about Lotto, a fallen friend. It's another sign that he's all substance over style and he displays another major strong-point of his game - a mellow vibe that cuts just as fast and just as deep as the dogged, anxious version of himself. A sick duality that you really need to absorb. Take in this album and prepare yourself for a rapper who's heart and soul -- ready to make statements we all need to hear.Â

Helmet: Dead to the World

Boston Manor: Be Nothing