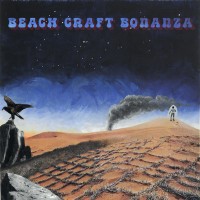 Beachcraft Bonanzaâ€™s release From Cradle to Wave is an album of psychedelic surf punk. When I hear surf punk, I think Agent Orange, but this band doesnâ€™t really sound much like them. Theyâ€™re slower paced and less aggressive, and have vocals and a style that sounds more like Husker Du or Superchunk or some other late eighties/early nineties indie or emo acts, though there are surf guitar riffs a plenty. Since I live at the beach in California and have gotten into the classic Nardcore stuff, I am pretty impressed by this style of punk rock and this release is a good specimen of it.

There are some more experimental tracks like Randall Flagg which is mostly words about the post apocalyptic radical activist villain of Stephen Kingâ€™s The Stand from the book, distorted, mixed in with trippy long raga like guitar work. The apocalyptic theme resurfaces a few times such as in Atomic Breeze. Escape From Oxy County is an instrumental track with some pretty well done surf guitar riffs but most of the other songs are about frustrations in everyday life. Trust Fund is a lyrical rant against rich punks who act poor. GED is a song about the singer maybe someday getting his GED. Toes To the Nose is another instrumental track, but slower than the last one.

Yr Excused is a long track I thought was instrumental but it has some angry lyrics with a catchy chorus of â€œWhatâ€™s Your Excuse?â€ later on. Unsafe At Any Speed seems to be a metaphorical song about being reckless chasing your dreams so it trips you up, but its a pretty heavy and passionate track with louder vocals than the others. Earth Day is a song about self absorption ignoring the decline of the world and has a kind of melancholic tempo reflecting the theme. From Cradle to Wave is another kind of sad song thatâ€™s about a quarter life crisis with lyrics like â€œon the beach, after the gold, still a kid but youâ€™re getting oldâ€.

I really enjoyed the album. I highly recommend it. There isnâ€™t enough surf punk out there and this band has poignant lyrics and some impressively diverse surf guitar work.