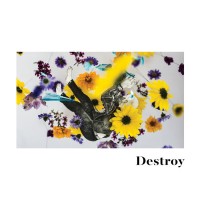 Destroy is Jeff Riddle's first solo album, but he's done plenty of time in the Philly punk scene and this is his shot at something more for himself. Folk-punk solo efforts can feel like the "next logical step" for a lot of punk songwriters, but Riddle and his backing band make Destroy as melodic and eclectic as they can, like the gorgeous fiddle/string accompaniment on "Three Sheets To The Wind". The result is a very solid folk-punk album with Riddle's vocals ranging in sound from a hoarser Frank Turner to Jeff Mangum, who also sings as if his voice wants to escape his body (this is a good thing!)


Classic punk rock self-loathing and drunken regret is thus all over here - the closer "Destroy" isn't a snarling paen to self-destruction, it's a brutal, brutal account of parental alcoholism ("the handle had a handle on her") and shows how the songwriting improves over the course of the album. The whole of the album has a bitter mid-life feeling, like he's writing right in the middle of a dark night of the soul. But those unexpected arrangements and touches really enhance the largely acoustic songs, like the thrumming garbage can drum sounds on "Trash Age" or the gorgeous glittering keyboard introduction on "Nervous Sister". Folk can feel a little boring after a bit and Riddle smartly side-steps that issue as much as he can.


My only real caveat would be that some of Riddle's lyric writing needs maybe a second draft - none of it's bad at all, just that the lyrics aren't always up to snuff, like "There's a hole in my chest where my heart should be." Nevertheless the arrangements are consummately excellent and really mapped out, so it's easy to focus on the music here and you should. This is a solid effort from a talented songwriter and is worth searching out, perfect for rainy nights and regretful, empty bottle strewn mornings.

Beachcraft Bonanza: From Cradle to Wave