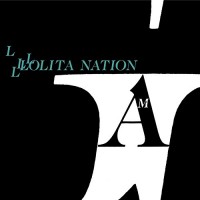 The big serif "A" caught my eye as I was flipping through the new releases, and I picked up Lolita Nation for the first time before I knew it was a Game Theory album. I was thrilled when I read the spine. I'd heard a couple of their songs on compilations, and nearly bought their previous album several times, but in those days I was burned out on buying vinyl to have bonus-track spiked CD releases come out a month later.

In the parking lot I tore the shrink wrap off with my teeth. Queued it up as I drove off.

"Lolita Nation" opens with 3 weird little palate cleansers and the comparatively unassuming "Not Because You Can," during which I was probably sitting at a light and getting back on the highway.

Then there's "Dripping with Looks."

I was listening on a Sony discman through unpowered $4 soap bar-sized speakers balanced on my dash, reducing the latest audio tech to sub-AM transistor tinniness.

Even through that craptastic setup, the opening riff sounded brooding, menacing, heavy. Oozing distortion, climbing up its scale like a rearing snake, weaving back and forth. And just where my hair-metal-weaned ears expect a staccato tom roll to crash into full-on rock WOARGH there's Scott Miller's wispy, enigmatic sigh, "so into the chaff, last laughs of the traveling class," and from that moment on I was riveted.

That's one of Miller's core tricks, to set up expectations and then subvert them, and the album does it quite a bit. Maybe most importantly, "Lolita Nation" subverts the expectation that a long album has to have some filler. It encompasses musique concrete interludes, a lengthy bad-trippy, psych-flavored jam, an angry mutated blues tune that veers from saints to Star Trek, a brash and brassy number about therapeutic dancing, and several of the most achingly gorgeous pop songs ever put to tape, and somehow it all works. Even the oddest little fragments fit in their context, and it all adds up to an amazingly cohesive experience that both demands and rewards end-to-end listening.

Scott Miller and I talked about "Lolita Nation" a few times. I know it was a bit of a millstone for him - a thing he'd done in his youth, that he wasn't particularly satisfied with, to which everything else would inevitably be compared, and found wanting. (Although he made at least two records I'd argue are very nearly as good.) Miller definitely resented being in a discipline where the work you do before you master your tools ls is typically considered the most vital, and "mature" is often code for "boring."

But - although he never quite said it - I also think he may have been a bit jealous of the naivete that enabled him to make "Lolita Nation" in the first place. He was scary-smart, but he was no elitist, and I don't think "Lolita Nation" was meant for the tiny audience of dedicated music fans that heard it the first time 'round. I think when Miller made it, he dared to hope that "Last Day That We're Young" could be a prom song pick. It has the widescreen ambition to be a touchstone of its generation, an expansive, inclusive state of the world document, like London Calling or Zen Arcade, if not the Beatles' White album or The Wall. I've been convinced for years that it's sort-of a concept album, but the concept was always hard to articulate. Now I think that, as much as anything, "Lolita Nation" is about setting aside cynicism long enough to believe that something as magical and potentially transformative as "Lolita Nation" itself can exist.

It's also been out of print for a quarter century, and acquired the mythic status - and hefty price tag - of historically hard-to-find records like Big Star's 3rd/Sister Lovers" Wilson's Smile, or Neu!'s debut. And now Miller's sad and untimely death has at last unjammed the contractual complexities that prevented its reissue. I'm more than a little jealous of anyone who gets to sink into it for the first time.

Lolita Nation's original issue was famously light on low end, and I was a bit leery of the remaster. Sonic tinkering raises questions about artistic intent versus trends of the moment. Maybe the record's brittleness was an essential part of its charm? And sure enough, there's way more low end on Omnivore Records' remaster. Sometimes it's a bit distracting, but generally satisfying, not entirely unlike the White stripes' album with Steven McDonald's bass parts dubbed onto it. Mostly I find myself wondering why Guillaume Gassuan's bass parts were buried so deep in the mix when they were so good.

If you buy the LP version of the reissue, the nearly two dozen bonus tracks are relegated to a standalone download experience, which seems right to me. They're a useful adjunct, but not revelatory, and probably more for the faithful then the unconverted.

A number of live and radio station tracks - many just Miller's voice and guitar - establish Lolita Nation's musical DNA with covers more (Hollies, Bowie) and less (John Lydon, both ways) obvious. One of the most interesting is a brief take on Jonathan Richman's "Roadrunner" that sounds like it was worked up as a segue into or out of "The Waist and the Knees"; it acquires a heady swagger far removed from the Modern Lovers jittery original. But the most startling is Miller's solo rendition of Iggy Pop's domestic violence paean "Gimme Danger" - "swear you're gonna feel my hand," is even creepier in Miller's delicate tenor than Pop's bellicose howl.

A number of demo and rehearsal tracks reveal the songs in varying stages of development. Perhaps the most surprising is "Choose Between Two Sons" - an instrumental bridge track in its final form, it once had lyrics, nearly three times the length, and lacked its signature melancholy melody line. The long version of "Chardonnay" is an interesting curiosity - it has less momentum than the released version. It was allegedly truncated because it didn't fit within the format limitations, but I think it's telling that Miller and the band chose to keep "Lolita Nation"'s interstitial bits - and I'm glad the main running order of the reissue maintains the integrity of that choice.

The Jesus and Mary Chain: Psychocandy