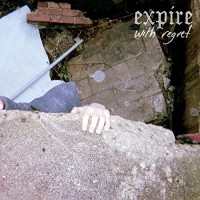 I have always believed that it is better to bow out gracefully than fade away. It takes guts to be self-aware and make that choice - I respect it. That being said, Wisconsinâ€™s Expire are far from irrelevant, nor have people stopped paying attention. Expire has always been consistent, not quite boring, but most people know exactly what to expect with Expireâ€™s music. With Regret is not surprising by any means, but it is very solid. This release functions as a sort of eulogy for the band, and works towards helping Expire to wrap up their journey as a band on a high note.

A lot of bands end up overdoing a good thing, putting out some underwhelming and overthought record that fails to propel them further, and ultimately results in a band breaking up. That is not the case with the final Expire full-length. Expire have always worked hard, from the days of just having a demo out, the band was touring and pushing their brand of hard-style hardcore. The band did not necessarily push the envelope, but they were consistent with their bouncy and riff driven output. The real shining aspect of With Regret is the quality of the guitar riffs. They were always the driving force of Expire, but With Regret really pumps out some heavy and bouncy hardcore.

The songs arenâ€™t quite as straightforward as past releases, they feature some interesting time changes, and pull in a few more metal influences with this release. As the quality of the riff has increased, I canâ€™t help but feel that the vocal output has been left behind to play catch up. The vocals are the same as every other release the band has done. They are not terrible by any means, but they are forgettable and one-dimensional. That being said, we are discussing a hardcore band, so wild falsetto harmonies and dynamics are not exactly the goal here.

The songs are short and heavy, and they definitely get the blood pumping. The album flies through its thirteen tracks, and while none of it is boring, the songs have a tendency to run together. It is sometimes difficult to tell whether a song has changed, or if it is just a continuation of the same song.

To sum up a bandâ€™s career with one final release is difficult, the songs on With Regret are heavy and fun, and are sure to please Expireâ€™s entire fan base. This is some of the bands strongest output to date, and will see Expireâ€™s legacy continue long after they have played their final show. This is a straight up hardcore record, no tricks, no fancy singing parts - it is striped down and real. At the end of the day, that is all we can really ask for.Â

The Jesus and Mary Chain: Psychocandy