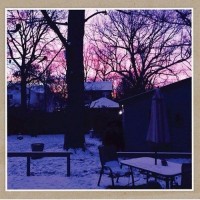 Maybe it's just reinforcing the stereotype of what mid-west pop-punk is â€œsupposedâ€ to sound like, maybe it has to do with Hospital Job sharing a member with The Copyrights (both bands' primary songwriter, no less), but it stands to reason, Never Get Cold very closely resembles really any given Copyrights album just with different players.

And not that there's anything wrong with that. On Never Get Cold, Hospital Job's third full-length album, the band cuts through 12 tracks of mid-tempo pop-punk in 29 minutes while maintaining the catchiness you've come to expect from bands of the genre. The songs following the tried-and-true formula of short and to-the-point verses, and sing-along choruses. Lyrically, it's very familiar territory as well. Many songs describing an almost self-imposed isolation while not entirely giving up hope just yet, evidenced even by the opening track â€œTried It All, Trying Againâ€ (â€œPassed out, washed up, burned down, Tried it all But now I'm trying againâ€).

There is no reinventing the wheel on Never Get Cold. It's an album that fits perfectly in It's Alive Records' catalog as the label seems to almost have the catchy pop-punk market cornered. And for those who are already fans of the genre, this is an album that should be very pleasing to the pallette.