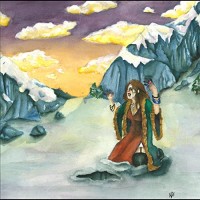 Bet on Rats exists sonically somewhere between Violent Femmes and Circle Jerks. While you would generally describe the Grand Rapids, MI quartet as folk-punk, sometimes it gets pretty aggressive for that particular genre. Opening track â€œFamiliar Feelingâ€ tears along with reckless punk energy and even contains a primal scream. â€œAttraction to Reactionâ€ embodies both styles. It starts off with some mellow acoustic strumming but eventually kicks into high gear. Singer Dan Smith has a voice with quite a bit of natural vibrato, and he effortlessly channels the nervous tension of someone like Gordon Gano, Jello Biafra or maybe Keith Morris.

Bet on Rats features the fairly standard setup of acoustic and electric guitar, bass and drums, but they maximize those instruments. The use of acoustic double bass is a nice touch. You can clearly hear the plucking on a handful of songs. The psychedelic sounding lead guitar is a little different for this type of music, and adds a certain uniqueness. The title track gets into some pseudo gospel territory that might remind you a bit of Slim Cessnaâ€™s Auto Club. â€œBurn the Pagesâ€ and â€œNormaâ€™s Home Invasionâ€ are standouts and feel like the albumâ€™s key tracks. While I wouldnâ€™t necessarily call Braille a concept album, it definitely feels like a cycle of songs. â€œGravestone on the Hillâ€ is its fast, catchy and less than optimistic eulogy.

Whether the music is upbeat or melancholy, the lyrics remain fairly dark. On â€œBraille, someone whoâ€™s already blind loses her hands to frostbite. The disturbing/vibrant cover art is very nice and will help you visualize it. (Donâ€™t scrimp on your artwork kids!) â€œGravestone on the Hillâ€ explores the futility of existence and adds insult to injury with grave robbery. Theyâ€™re definitely telling a story that doesnâ€™t seem to have a happy ending. Bet on Rats is one of those bands that can play a mellow set at a singer-songwriter show or tear it up at a punk show. Braille is an impressive full length debut, and another great example of all the good stuff coming out of Grand Rapids.