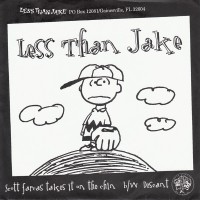 Less Than Jake and J Church, two bands that matter still. The latter sadly is no longer around having broken up after lead singer Lance Hahn died in 2007 due to complications from kidney dialysis, but the former still is and kicking it around state-by-state playing shows to their diehard fans and getting people moving. Knees might be a bit weaker, but this reviewer still loves to jump when hearing LTJ.

This little 7â€ split is a real winner. What drew me in was the simple cover art with good olâ€™ Charlie Brown. Something about that kid is totally relatable and despite his sometimes depressive self, the child can still have a good time doing things. I guess listening to Ska and Punk music fits his mold.

LTJ play two tracks, the first being â€œScott Farcas Takes It On the Chinâ€ which was also released on their third album Hello Rockview. Itâ€™s simple Ska-Punk with fun lyrics and a nice speedy pace. Iâ€™ve always liked the brass section of LTJ. Those guys really add depth to the band and always stand out in contrast to the more traditional punk tunes the band makes. A good combination that never gets stale.

The second LTJ track is a cover of the song â€œDescantâ€ by Emo/Punk band Spoke. This is a nice cover and the brass is left out with more focus on the musicianship of guitarists Chris DeMakes and Roger Lima. They do a decent tribute to a more obscure band that many outside of the bands local scene probably donâ€™t know.

The B-side to this split are two exceptional songs by J-Church, â€œPlasticâ€ and â€œYou May Neverâ€. These two tracks can only be found on this split and the Altamont '99 compilation album from Au Go Go Records released in Australia only. â€œPlasticâ€ is a simple J Church song and lyrically itâ€™s pretty witty with Hahn singing lines like, â€œEmpty glasses made of plastic / So unlikely and fantastic / I might cruise in coffee houses / Iâ€™m returning naked glancesâ€

â€œYou Might Neverâ€ is another solid track of Punk music that straddles more on the poppy side. J church were always able to find the right balance between Pop-Punk and more traditional Punk, often at times leaning a bit into the Post-Hardcore/Indie sounding side. Thatâ€™s not a mark against them. Hahn just had a great voice and the music they created was very good at passing through multiple boundaries.

Going through some of your favorite bands catalogue can be an overwhelming experience. Both bands made several epâ€™s and split releases with J-church being one with the largest output and a collectors dream (or nightmare!).

This little release is good stuff and simple enough to just let the music do all the talking for it.