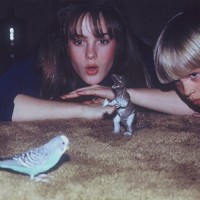 Big Thiefâ€™s debut is a group of songs brought to you by gifted songwriter Adrianne Lenker. Before forming Big Thief, she released music under her own name, however Masterpiece is no solo effort. The band, which includes her longtime guitarist Buck Meek, adds drama a single person cannot express alone.

Masterpiece, an apt title for this collection, begins with Lenker feeling right at homeâ€”alone, bedroom sounding. But this is a red herring (although various uses of her solo sound are sprinkled throughout) and the subsequent songs blaze ahead as a fully formed indie rock band.

One thing thatâ€™s clear about Masterpiece is the weight. A better part of the album deals with the dissipation of relationships, heartbreaking in the lushest way possible. â€œReal Loveâ€ bleeds this dichotomy. â€œReal love makes your lungs black,â€ â€œHow much blood is worth the draw?â€ she sings as the guitars chomp at the bit, just as emotionally distressed. Speedy Ortiz comes to mind especially on â€œInterstate.â€ Both Lenker and Sadie Dupuis have a certain knack for story telling and a guitar that follows their emotional journey loyally.

Lenkerâ€™s vocals continuously remain both strong and vulnerable. Sheâ€™s fully in control one minute and then broken the next. Never more so than on the title track and â€œPaul.â€ The former, with its somewhat changing hook, â€œCause I saw the masterpiece, she looks a lot like you, wrapping your left arm â€˜round my right,â€ evokes such a clear feeling of a layered love. By contrast, â€œPaulâ€ tells the story of (possibly the same) romance going south. Linker tries hard to avoid spending time with an ex but weighs the pros and cons: â€œIâ€™ll be a killer and a thriller and the cause of our death.â€ It packs so much into one line, itâ€™s hard to believe the rest of the song delves even deeper.

Thereâ€™s so much to unpack on Masterpiece, each song beautiful in its own right. Whether the acoustic plucking on â€œLorraine,â€ the sadness on â€œParallelsâ€ or the beefed-up â€œVegas,â€ the album ebbs and flows as oneâ€™s mind does when dealing with love. For Big Thief to capture that over forty minutes is a minor miracle. Masterpiece feels like homeâ€”safe and comfortable even in the darkest times.Â