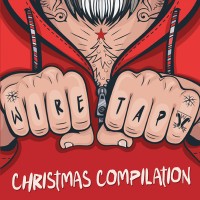 I consider myself a bit of a connoisseur of Christmas punk music. so I was really excited to hear about Wiretap Recordsâ€™ new Christmas compilation album. Besides the fact that itâ€™s 13 tracks of some new punk rock Christmas songs for me to check out, itâ€™s also a compilation of lesser-known bands, so I get to discover some bands I didnâ€™t know about along the way. I think the only artist on here that I had even heard about before I downloaded this compilation was the Dollyrots, so there was plenty to discover in this compilation, and there are a lot of artists from this compilation that Iâ€™ll be checking out very soon.

First of all, I know this is a nitpicking complaint, but please allow me to indulge my OCD for a moment: I donâ€™t understand why, on a compilation where about half of the songs are covers, why only three of the songs on the album get labeled as covers in the track listing? Either label them all as covers and give credit to the original artist or donâ€™t label any of them that way. Okay, nitpicking over.

Speaking of covers, I have to say that I donâ€™t really like to listen to compilations like this for the covers. Itâ€™s so easy to slap together a quick cover of an old classic, but Iâ€™m much more impressed by a band that took the time to write their own Christmas song. On this compilation, the weakest points are some of the covers. Sons of Strangers turn in a phoned-in cover of â€œBlue Christmasâ€ thatâ€™s a total snoozer. Ryan Allen & His Extra Arms do a good cover of Big Starâ€™s â€œJesus Christ,â€ but the somber religious number seems out of place amongst all the debauchery going on elsewhere on the album. The Stragglersâ€™ cover of The Vandalsâ€™ â€œOi to the Worldâ€ is competent, but does nothing to put its own spin on the original. Say what you will about No Doubtâ€™s cover of the song, but at least they put their own spin on it.

One of the few exceptions to the â€œcovers bad, originals goodâ€ rule on this album is the Dollyrotsâ€™ marvelous cover of Mariah Careyâ€™s â€œAll I Want for Christmas is You.â€ Taking a Blondie-style approach to the song, they turn it into a cross between pop-punk and a 1950â€™s girl band song. Refusing to play the song for laughs, the Dollyrots play it with as much earnestness as if it was their own original song. Itâ€™s a vast improvement on the cloying original, and also a huge improvement over the time Zebrahead tried to turn the same song into a rap-rock track.

Now, when it comes to original songs, some of which get their first ever release on this compilation, theyâ€™re all winners. My Double, My Brotherâ€™s â€œThe Days to Be Homeâ€ riffs off of the melody of â€œI Saw Three Shipsâ€ but turns it into their own original piece. Avenuesâ€™ â€œThis Christmasâ€ is just a perfect pop-punk Christmas carol. Margateâ€™s â€œSnow Dayâ€ is more of a winter song than a Christmas song, but it succeeds in its brief 90 seconds of childhood joy over missing school for a snow day. The Lucky Eejitsâ€™ â€œSanta on 98thâ€ depicts a particularly vulgar Santa Clause bringing drugs to all the junkies for Christmas. But the shining jewel of this album really is Brenna Redâ€™s â€œPunk Rock Christmasâ€ which blends classic punk references with Christmas joy for an instant classic that Iâ€™ll be listening to for years to come.

The best part is that the whole compilation is offered on Bandcamp where you can name your own price. You donâ€™t need to pay anything for the album if you donâ€™t want to, but since the proceeds go to the anti-bullying organization Stomp Out Bullying, I suggest you pay at least $1 for it like I did. For all its flaws, itâ€™s a free album, and it packs in a lot of great tunes for very little money.