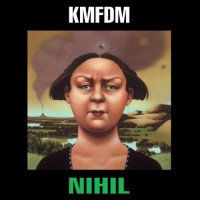 Youâ€™ve probably heard of this band before...

Maybe youâ€™ve seen their name pop up when searching for records by bands who dabble in the genre known at Industrial? Perhaps youâ€™ve recognized their iconic album artwork which has consistently been created by commercial artist Aidan â€œBrute!â€ Hughes? Of course thereâ€™s the chance a name drop happened upon you by that one kid in high school who wore the baggy jeans and smelled of Aspen cologne? Or maybe, just maybe you have no idea who the heck KMFDM are! Well hereâ€™s one album to give at shot at and finally get it over with and say, â€œYeah, Iâ€™ve heard of KMFDM. That one album ***** was pretty good/sucked. Skinny Puppy/Front 242 are WAAAAYYYY better!â€

Nihil is the eighth studio album by the German Industrial/Metal band Kein Mehrheit FÃ¼r Die Mitleid, or simply KMFDM. They also went by the nickname "Kill Motherf****** Depeche Mode" to confuse American journalists on their first US tour.

Using a blend of Industrial landscapes of post-apocalyptic machinery, mixed with heavy metal riffage, scratchy electronic dance music, and sometimes anarchic/sleazy lyrics, KMFDM have been one of the most consistent bands in the music industry and still continue to record, tour, and connect with their very intimate cult-like fan base.

Nihil was released in 1995 on the independent Wax Trax! Records which had be acquired by TVT Records in 1992. Wax Trax! Records was home to many Punk, New-Wave, and Industrial bands in Chicago and went on to become America's preeminent industrial label of the 80â€™s and 90â€™s. The labelâ€™s output of classic Industrial releases put them in the American underground spotlight and acts like Revolting Cocks, Coil, Meat Beat Manifesto, and Pailhead (Ian MacKaye and Ministry side project = awesome!) became well known.

The one song most people know by KMFDM is second track â€œJuke Joint Jezebelâ€. This was the first single released and is regarded as the bands most famous. Hitting the underground airwaves at the time, the songâ€™s blend of Industrial and electronic genres helped usher in a club scene that broke boundaries and saw all sorts of people connect to the music who otherwise wouldnâ€™t have anything to do with each other. The song was also featured in the first Mortal Kombat and Bad Boys movies so thereâ€™s that as well.

Lead singer and founder Sascha Konietzko sings like a madman on the album, never stopping the awesome carnage his seedy tone allows. Heâ€™s backed by guitarist GÃ¼nter Schulz whoâ€™s work on those early KMFDM albums with his gift at playing speed metal and co-writing a lot of the songs proved to be the cusp of what made those early years of the band mean so much to people. Also not to forget the exceptional help of vocalist/bassist Raymond Watts (pig), guitarist/multi-instrumentalist En Esch (Pigface), and journeyman drummer Bill Rieflin (R.E.M., Swans, King Crimson) among several other collaborators who worked on the record.

A lot of Industrial acts sound like they belong only in the studio, but when playing live they tend to become something much more. KMFDM became known for their live shows and songs from this album like â€œUltraâ€, â€œBruteâ€ and â€œTrustâ€ still get played to raucous applause. And despite the seriousness of the music this band makes, they donâ€™t mind occasionally poking fun at themselves which can make those most cynical of folks appreciate.

In April 20, 1999 the Columbine High School massacre took place. KMFDM gained unwanted media coverage by way of shooter Eric Harris who posted random song lyrics to his website. Often at times people donâ€™t know who to blame for societies troubles, and when thereâ€™s no clear idea of whoâ€™s at fault, often blame comes those who have nothing to do with whatever is happening. Those outsiders who look and sound different are often the easy targets for finger pointing. KMFDM had a dark cloud hang above them for some time after Columbine and thatâ€™s left a dent in their legacy in some peopleâ€™s minds. But that shouldnâ€™t discount what they have done as artists. Let the music speak for them. The band is fiercely political, with many lyrics taking stands against violence, war, oppression, and censorship. People just didnâ€™t care about the factsâ€¦

KMFDM are a band going by their own rules and doing their own thing. Reminds me of the early days of the Misfits and how they developed their own musical universe wholly unique to them. That do-it-yourself attitude is pretty punk.

Other albums to check out by the band are Symbols, NaÃ¯ve, and Xtort. If you are a fan of acts like My Life with the Thrill Kill Kult, Front Line Assembly, Ministry, and Nine Inch Nails then KMFDM should fit right in with your playlist. Give this a listen. Dig it.

Every Time I Die: Low Teens